For Immediate Release
Office of the Press Secretary
November 21, 2005

THE PRESIDENT: Amar bain uu? (Applause.) Thanks for the warm welcome. And, Mr. President, thank you for your hospitality. I thank you, the Prime Minister, and the government for such gracious hospitality. I want to thank the First Lady for being so kind to Laura. It is really, really an honor to be here in your great country. And we bring with us the good wishes of the American people. 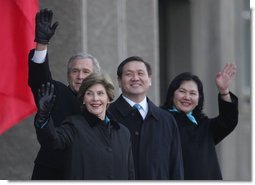 I'm here on an important international mission. Secretary Rumsfeld asked me to check on his horse. (Laughter.) I feel very much at home here in your country. This is a beautiful land, with huge skies and vast horizons -- kind of like Texas. (Applause.) I thank you for the invitation. I'm honored to be the first sitting American President to visit Mongolia, and America is proud to call you the third neighbor. (Applause.)

Fifteen years ago, Mongolians gathered outside this great hall by the thousands, braving sub-zero temperatures and defying a repressive regime, to demand their liberty. The protesters included students and workers and monks, and a group of young democrats on a hunger strike. By the force of their convictions, they drove the communist leadership from power. Within months, free elections were held, and a free Mongolia was born. And today, one of the young hunger strikers who stood vigil outside the building now serves as the Prime Minister of your great nation. (Applause.)

Mongolia has made the transition from communism to freedom, and in just 15 years, you've established a vibrant democracy and opened up your economy. You're an example of success for this region and for the world. I know the transition to liberty has not always been easy and Americans admire your patience and your determination. By your daily efforts, you're building a better life for your children and your grandchildren. And I've come to tell you, as you build a free society in the heart of Central Asia, the American people stand with you. (Applause.)

Earlier this year, when a terrible hurricane struck my nation's Gulf Coast, the Mongolian people stood with us. Even before the flood waters had fully receded, your government pledged aid, and a group of business leaders in Mongolia raised additional money. These funds are helping to rebuild shattered lives in my country. In a time of tragedy for America, Mongolia showed her compassionate heart, and my country thanks you for your support and friendship. (Applause.)

Americans and Mongolians have much in common. Both our nations were settled by pioneers on horseback who tamed the rugged plains. Both our nations shook the yoke of colonial rule, and built successful free societies. And both our nations know that our responsibilities in freedom's cause do not end at our borders, and that survival of liberty in our own lands increasingly depends on the success of liberty in other lands. 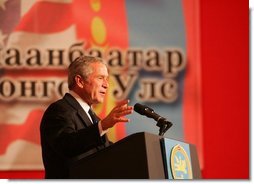 This conviction has inspired the Mongolian people to share the hope of freedom with others who have not known it. Mongolian officers have served in missions to keep the peace in Western Sahara and the Congo. Your forces are serving alongside U.S. and coalition forces helping to train the Armed Forces of a free Afghanistan. And in September, Mongolia sent its fifth rotation of forces to Iraq and Mongolian soldiers are serving in that country with courage and great distinction. (Applause.)

Two Mongolian soldiers named Sergeants Azzaya and Sambuu-Yondon are here with us today risked their lives to stop a suicide bomber who was trying to drive a truck full of explosives into a coalition mess tent. As the truck hurtled towards them, they opened fire killing the terrorist and saving countless lives. As Commander-in-Chief of the United States Armed Forces, I thank these brave Mongolian soldiers, and all who have served on the front lines of the war on terror. (Applause.) The Mongolian Armed Forces are serving the cause of freedom and the United States Armed Forces are proud to serve beside such fearless warriors.

In Iraq, Mongolian forces have helped make possible a stunning transformation. Earlier this year, Iraqis went to the polls and chose their leaders in free elections. Last month, they returned to the polls and approved a democratic constitution for a free Iraq. And in a few weeks time, Iraqis will vote once again to choose a fully constitutional government to lead them for the next four years. With their ballots, the Iraqi people are sending a clear message: There will be no return to the days of tyranny and terror; the future of Iraq belongs to freedom. (Applause.)

Many of you can still recall the exhilaration of voting freely for the first time after decades of tyranny. You know the satisfaction of seeing leaders you chose take office -- and of seeing them leave office if you decide to replace them. You know the feeling of living under a constitution that guarantees personal liberties like free speech, free assembly, and equality before the law. And now, because of the courage of Mongolian and coalition forces, the people of Iraq know this feeling, as well.

Free people did not falter in the Cold War, and free people will not falter in the war on terror. (Applause.) We see the determination to live in freedom in the courage of Iraqi and Afghan citizens who defied the terrorists to cast their ballots. We see it in the bravery of ordinary Lebanese who waved cedar flags and drove an occupying power from their borders. And we've seen it in the daily courage of the Mongolian people who claimed their freedom 15 years ago, and are now standing with others across the world to help them do the same.

As you help others secure the blessings of liberty, you continue the work of building a free society here at home, and as you travel this path, the United States walks with you. (Applause.) Earlier this year, I announced a new Solidarity Initiative to provide financial assistance to nations like Mongolia that are standing with America in the war on terror. Mongolia will receive $11 million under this initiative, critical funds to help you improve your military forces, so we can continue working together for the cause of peace and freedom.

Mongolia has undertaken political and economic reforms. You have now held numerous free elections and two peaceful transitions of power from one party to another, which is a sign of a successful democracy. This year, Mongolia ratified the United Nations Convention against Corruption, and I urge your parliament to pass the anti-corruption legislation needed to implement that treaty. After decades of centralization, you privatized more than 80 percent of Mongolia's state enterprises, and the Mongolian economy grew at a rate of more than 10 percent last year.

In recognition of your progress, Mongolia has been named a country eligible for assistance under the Millennium Challenge Account, a new program the United States has established to assist countries that govern justly, invest in their people, and promote economic freedom. My administration is committed to working with your country to complete a Millennium Challenge compact as soon as possible and to help the Mongolian people continue on the path of reform. (Applause.)

Next year, your country will celebrate the 800th anniversary of the founding of Mongolia. There's a legend of a Mongolian woman who gave each of her five sons an arrow. She told each to break the arrow in his hand, which they did. She then tied the five arrows together, and told each to try and break the bundle. None could do it. And she told them, brothers who stand alone, like single arrow shafts, can be broken by anyone; but brothers who stand together, like a bundle of arrows, cannot be broken. Today, Mongolia and the United States are standing together as brothers in the cause of freedom. (Applause.) And if free nations remain united, no force of tyranny or terror will break us.

I've come here to thank you for your contributions to freedom's cause and to tell you that the American people appreciate your courage and value your friendship. And on behalf of all Americans, ikh bayarlalaa. (Applause.) And may God bless your wonderful country. Thank you very much. (Applause.)