For Immediate Release
Office of the Press Secretary
November 10, 2005

THE PRESIDENT: Mr. Ambassador, thank you for receiving us. We have come to your embassy to express our heartfelt sympathies for the people of Jordan, and for the families who are grieving today because of the murder of innocent people.

I spoke to His Majesty this morning and conveyed these very same thoughts. And during my conversation, as he described the fact that these bombers went into a wedding and killed people there that were there to celebrate life, killed innocent -- the bombers killed innocent women and children, it struck me, Mr. Ambassador, that -- once again, that we face an enemy that has no heart, an enemy that is defiling a great religion, of Islam. Today -- yesterday in Jordan, Muslims died at the hands of these killers simply because they were in the wrong hotel, simply because they wanted to be with their families and enjoy life. 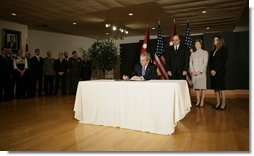 This enemy must be defeated. They have no heart; they have no conscience. 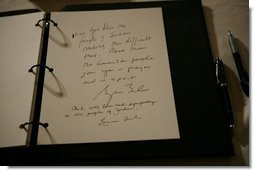