For Immediate Release
Office of the Press Secretary
November 9, 2005

THE PRESIDENT: One month ago, the nation of Pakistan suffered its worst natural disaster in a century when a massive earthquake struck northeast of the capital city of Islamabad. The human toll is staggering. This disaster has taken the lives of more than 70,000 Pakistanis. It has injured almost 70,000 more, and left nearly 3 million people without their homes. 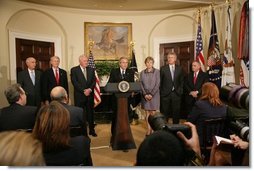 In India, the earthquake killed more than a thousand people and injured over 6,000 others. As the harsh mountain winter approaches, millions of people in these affected areas will continue to need food, water, shelter and medical care. They will also need long-term help to get their lives and communities back on their feet. Once again, the world is called to comfort those affected by a terrible natural catastrophe. People across our country pray for the people in Southeast Asia. And people in our country are willing to help, as well.

The United States is playing a leading role in the relief and recovery efforts, in cooperation with the government of Pakistan. We've already made $156 million available for relief and reconstruction needs. We've provided food, water, blankets, tents and medical care. We have disaster response personnel on the ground to assess needs and offer assistance.

Our military is playing a key role, as well. A Navy construction battalion is helping to clear roads and solve other engineering challenges. Our helicopters have flown over a thousand missions to deliver aid to isolated areas. And they have transported thousands of people to places where they can receive medical treatment and shelter. We've also got a military hospital now operating in Pakistan. I'm grateful to the men and women in uniform for the noble work they are doing. And they represent the best of America, the generous spirit of our country. Our government's response to this tragedy is -- should say to the people of the world, we care when somebody else suffers.

Last month I announced that five distinguished American business leaders would work to encourage private and corporate contributions to help those affected by the natural disasters in Southeast Asia. Jeff Immelt and Jim Kelly, Hank McKinnell and Sandy Weill are with us today, and I want to thank you all for being here. Anne Mulcahy of Xerox is not here, but she's a part of the team. I want to thank them very much for their willingness to serve, and some of them will be going over to Pakistan, along with Ambassador Hughes and others, to assess the situation as a part of a presidential delegation. When they come home from Pakistan, they're going to travel our country to rally our citizens to help the victims of this disaster.

I ask all of our citizens and businesses to contribute generously to this cause. The international response to this disaster has been generous, but the needs are still great. And so I also urge other governments, peoples in other lands, to do whatever they can do to help.

In recent months, we've had our own disasters to deal with. We had the destruction on the Gulf Coast of our country, and I want to remind our citizens that people around the world came to help us. They offered not only money and equipment, but they offered their prayers. I know that nothing can take the grief away of those whose lives have been affected. But I also hope the people who have been affected by natural disasters know that there's a lot of people that care for them, there's a lot of people who want to help.

As families across Southeast Asia begin to rebuild their lives, we offer our sustained compassion, our prayers and our assistance. And we offer you our assurance that America will continue to be there to help.

I want to thank you all again for being here. Thank you for coming.