For Immediate Release
Office of the Press Secretary
October 26, 2005

PRESIDENT BUSH: It's been my honor to welcome the Prime Minister of Macedonia to the Oval Office. Prime Minister, I am grateful for your friendship. I am grateful for the strong support that you have given in our efforts to win the war on terror. You've been a steadfast ally, and the American people are grateful. I also appreciate the fact that you have committed troops alongside our troops, in some of the world's newest democracies, in Afghanistan and Iraq. I want to thank you for that, as well. 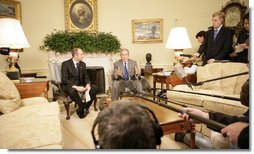 I also appreciate the progress you've made in implementing the Ohrid Agreement. You've showed the world that it's possible for people of different backgrounds to live together in peace. I want to thank you for your leadership. I also compliment you on the progress you've made toward implementing the reforms necessary for consideration in NATO and the EU. I know this is a big concern to you. I want to thank you for sharing your thoughts with me about your country's desire to join NATO and your aspirations for the EU. I appreciate that very much. Thank you for your confidence.

All in all, I'm impressed by your leadership, and welcome you to the Oval Office.

PRIME MINISTER BUČKOVSKI : Thank you, Mr. President. I feel be here in the White House with President Bush and the historic 10th anniversary of the U.S.-Macedonian bilateral relations, which I must say, have never been closer. We have agreed that today Macedonia is a success story in building a stable, multiethnic democracy in the Balkans.

I thanked President Bush for the continued U.S. support of our democracy -- specifically for the U.S. role in the implementation of the Ohrid framework agreement, and to also express the gratitude of the people of Macedonian for U.S. recognition of our constitutional name, Republic of Macedonia.

And I told the President that we are proud to have our soldiers in Iraq and Afghanistan, and that we intend to stay there as long as it is needed. We highly appreciate the leadership of President Bush and advancing freedom and democracy throughout the world. We have both emphasized the importance of Macedonia's NATO integration and EU candidacy in cementing our progress and helping the region make the final step on the path of the Europe.

And finally, I told President Bush that Macedonia will continue to play a positive and constructive role in the Balkans, especially now, when Belgrade and Pristina, together, lead the international community, will start negotiation about eventual permanent status of Kosovo.

PRESIDENT BUSH: Thank you. Appreciate you.