For Immediate Release
Office of the Press Secretary
October 26, 2005

Statement on S. 397, the "Protection of Lawful Commerce in Arms Act"

S. 397, the "Protection of Lawful Commerce in Arms Act," which prohibits liability actions against firearms or ammunition manufacturers and sellers for unlawful misuse of their products; prohibits sale of a handgun unless the purchaser is provided with a secure gun storage or safety device; and provides for minimum sentences when armor piercing ammunition is used in certain crimes. 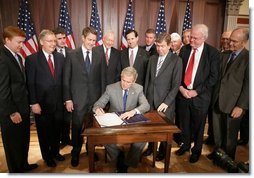