For Immediate Release
Office of the Press Secretary
October 17, 2005

THE PRESIDENT: Please be seated. Thank you. Welcome to the White House. This is the fifth year in a row that it's been my honor to host an Iftaar in the State Dining Room.

Our distinguished guests represent the millions of Muslims that we're proud to call Americans, and many Islamic nations are represented here that America is proud to call friend. We welcome the representatives from many countries with large Muslim populations. I want to thank you all for coming to celebrate an honored tradition of the Muslim faith, and wish you a, "Ramadan Mubarak." 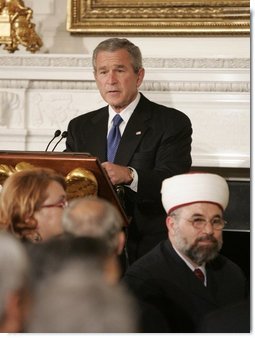 Ramadan is the holiest time of the Muslim year. According to Islamic teaching, this month commemorates the revelation of God's word to the Prophet Muhammad in the form of the Koran. For more than a billion Muslims, Ramadan is a time of heartfelt prayer and togetherness. It is a time of fasting and personal sacrifice. It's a time to give thanks for God's blessings through works of charity.

One Muslim leader said: "It's a national and Islamic obligation to assist one's neighbors when they are in need." The American people saw that spirit as we recovered from Hurricanes Katrina and Rita. The world sees that spirit, that compassion of Islam, through the countless acts of kindness following the recent earthquake in southeast -- in South Asia.

America is fortunate to count such good-hearted men and women among our fellow citizens. We have great respect for the commitment that all Muslims make to faith, family, and education. And Americans of many backgrounds seek to learn more about the rich tradition of Islam. To promote greater understanding between our cultures, I have encouraged American families to travel abroad, to visit with Muslim families. And I have encouraged American families to host exchange students from the Muslim world. I have asked young Americans to study the language and customs of the broader Middle East. And for the first time in our nation's history, we have added a Koran to the White House Library. (Applause.)

All of us gathered tonight share a conviction that America must remain a welcoming and tolerant land, in which our people are free to practice any faith they choose. We reject every form of ethnic and religious discrimination. As I said in my second Inaugural Address, we cannot carry the message of freedom and the baggage of bigotry at the same time.

We also share a common hope for the future -- that our children and grandchildren will grow up in a safer and more peaceful world. Delivering on that promise to future generations requires action from our generation. We must stand confidently in the cause of freedom -- including the freedom of people everywhere to practice their faith in peace. We must also firmly oppose all who commit evil in God's name. I am grateful to the Muslim nations that have joined our coalition in the war on terror -- including many nations that have been victims of terror themselves.

As we work together to defeat the terrorists, we must be very clear about the enemies we face. The killers who take the lives of innocent men, women, and children are followers of a violent ideology very different from the religion of Islam. These extremists distort the idea of jihad into a call for terrorist murder against anyone who does not share their radical vision, including Muslims from other traditions, who they regard as heretics.

Their strategy will fail. Many Muslim scholars have already publicly condemned terrorism, often citing chapter 5, verse 32 of the Koran, which states that killing an innocent human being is like killing all of humanity, and saving the life of one person is like saving all of humanity. I appreciate those of you here who have joined these scholars in rejecting violent extremists. And I believe the time has come for all responsible Islamic leaders to denounce an ideology that exploits Islam for political ends, and defiles your noble faith.

I have great confidence in the future of this nation, and in the future of the Muslim world. I have been inspired by the courage of people in Afghanistan and Iraq, where Muslims are celebrating Ramadan in two of the world's newest democracies. I believe that people of every religious and ethnic background have the right and the desire to be free. And I believe that the spread of freedom and justice and tolerance in the broader Middle East will lead to the peace that we all seek.

As we celebrate this special Iftaar, we renew the ties of friendship that bind all those who trace their faith back to God's call on Abraham. We recognize the many hopeful works we have achieved together. We look forward to learning more from each other in the years ahead.

I'm so grateful that you joined us today. I wish you a blessed Ramadan, and may God bless you all. (Applause.)