For Immediate Release
Office of the Press Secretary
October 17, 2005

THE PRESIDENT: I want to welcome some of my fellow Texans here in the Oval Office. We've got Republicans and Democrats, people who have been on the court, attorney generals. They're here to send a message here in Washington that the person I picked to take Sandra Day O'Connor's place is not only a person of high character and of integrity, but a person who can get the job done. 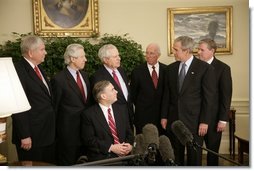 Harriet Miers is a uniquely qualified person to serve on the bench. She is smart, she is capable, she is a pioneer. She's been consistently ranked as one of the top 50 women lawyers in the United States. She has been a leader in the legal profession. She's impressed these folks. They know her well. They know that she'll bring excellence to the bench.

So I want to thank you all for coming. Thank you for being part of a group of people who understand that Harriet Miers will be a superb Supreme Court judge.

JUDGE HILL: Thank you. Mr. President, we just all want to thank you for this nomination. We're excited about it, and we're here to try to let the people of America know what we all know, that she is an absolutely fantastic person and a great lawyer, and will make a great judge.

THE PRESIDENT: Well, thank you, sir. Appreciate you coming. Thank you all.