For Immediate Release
Office of the Press Secretary
October 16, 2005

THE PRESIDENT: On behalf of the American people, I'd like to congratulate the people of Iraq for the successful completion of a vote on their draft constitution. By all indications, the turnout was greater than the turnout from the last January election, which is good news. By all indications, the Sunnis participated in greater numbers in this election than last time. And that's good news. After all, the purpose of a democracy is to make sure everybody is -- participates in the process. 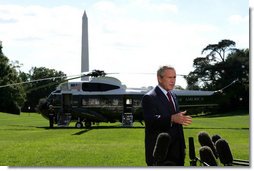 I'm also pleased, from the initial indications, that the level of violence was considerably less than the last election. That's a tribute to the Iraqis -- forces who we've trained, as well as coalition forces that worked hard to make sure that democracy could move forward in Iraq.

This is a very positive day for the Iraqis and, as well, for world peace. Democracies are peaceful countries. The vote today in Iraq stands in stark contrast to the attitudes and philosophy and strategy of al Qaeda and its terrorist friends and killers. We believe, and the Iraqis believe, the best way forward is through the democratic process. Al Qaeda wants to use their violent ways to stop the march of democracy because democracy is the exact opposite of what they believe is right.

So, again, I congratulate the Iraqi people. I thank you for meeting this milestone. Thank you for doing what is right, to set the foundations for peace for future generations to come.