For Immediate Release
Office of the Press Secretary
October 12, 2005

Welcome back. This is a happy moment, because I get to see my friend again. It's a sad moment because he is leaving office. He has done an extraordinary job. We have built a strong personal relationship, but more importantly, we have a strong strategic relationship with Poland, thanks to your leadership. 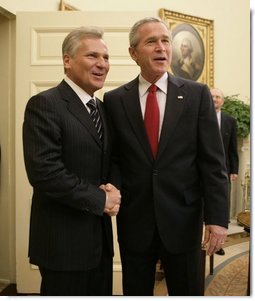 Aleksander has helped advance the cause of peace by advancing the cause of freedom. He has served as a mentor for new democracies in the neighborhood. He has proven that you can be a friend to the United States and a loyal member of the EU at the same time. We have worked hard together to improve the lots of both our peoples.

And, Mr. President, you can leave with your -- your office with your head held high, because of the fine job you have done. I am glad you came back, and it's an honor to be able to praise you to the people of your country for a job -- a fine job.

PRESIDENT BUSH: Hold on, we're going to a little --

PRESIDENT KWASNIEWSKI: Yes. Thank you for --

PRESIDENT BUSH: Do want to do an interpretation?

PRESIDENT BUSH: Especially after what I just said. (Laughter.)

I started my presidency in a different world. And now I'm leaving the office when the world is different and the world now is better. We are together in NATO. We are in NATO together with other Central and Eastern European countries. We are in NATO, together with the Baltic states, and we are also together in a group, in fact, family. Together we are building peace and stability in different parts of the world. We are fighting together against terrorism. We are fulfilling our task with joy and satisfaction, and we do it effectively. And together we are bringing more peace and more democracy to the world.

We are also creating more values with humanity. We are fighting for human rights and for the dignity of human beings.

We have been cooperating together with President Bush and we have made together very hard and very difficult and very important decisions. Today we talked about what we have done together and we have also talked about the fact that we will be continuing the policy of cooperation between the two countries, and that the new Polish government and my successor in the presidential office will continue this policy in the years to come.

I want to say that I'm very happy that we are enjoying and following the values between Polish and American cooperation, and that we are developing -- (inaudible) -- contacts. We have summed up our bilateral cooperation. There is still very much ahead of us, and here, as you can see here on the table next to President Bush, there is a document that I have presented to him, and this document is the -- (inaudible) -- of our achievements, and it is also information about our future cooperation. It's also the encouragement to cooperate in the future. 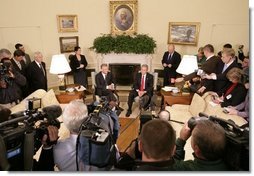 Q Thank you, Mr. President. Why do people in this White House feel it's necessary to tell your supporters that Harriet Miers attends a very conservative Christian church? Is that your strategy to repair the divide that has developed among conservatives over her nominee?

PRESIDENT BUSH: People ask me why I picked Harriet Miers. They want to know Harriet Miers' background; they want to know as much as they possibly can before they form opinions. And part of Harriet Miers' life is her religion. Part of it has to do with the fact that she was a pioneer woman and a trailblazer in the law in Texas. I remind people that Harriet Miers is one of the -- has been rated consistently one of the top 50 women lawyers in the United States. She's eminently qualified for the job. And she has got a judicial philosophy that I appreciate; otherwise I wouldn't have named her to the bench, which is -- or nominated her to the bench -- which is that she will not legislate from the bench, but strictly interpret the Constitution.

Q Mr. President, President Bush, there is a significant change of power underway in Poland right now. Some have already said that they would ask for more from the United States in return for Polish support and continued engagement in Iraq. Are you aware of these positions and do you expect any changes in Polish-American relations, any tougher talk, maybe?

PRESIDENT BUSH: Well, we had a talk about who might succeed Aleksander, and their opinions. My advice would be for whoever succeeds the President to come and visit, and to exchange visits with foreign ministers, such as our foreign minister as well as our minister of defense, and to strategize. That's what friends do. They share concerns and share goals, and then work together to satisfy concerns and achieve goals. And I'm confident that's going to happen. 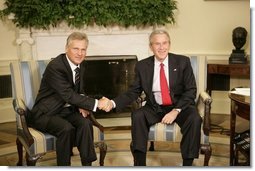 PRESIDENT KWASNIEWSKI: (As translated.) May I add a few words for the Polish media here? We have talked about this and I think that this is information important for the Polish media. Poland wants the stabilization mission in Iraq to be a success and to complete the success. We want to be a serious partner and we want to be a steadfast and loyal partner in the coalition. Our troops are in Iraq and they will stay in Iraq until the end of January, and the decision has been made and nothing changes here. But we have to think about the future and we have to respect the right of the new government and the right of the new president to make their decisions about it.

It was the right suggestion of President George W. Bush, and the decision will be forwarded by me to our authorities and people in power when I come back, that after the new government is established, the new power's defense minister and the foreign minister should come here to Washington to talk about the future, because the future goes far beyond January next year. And we have to talk about what we shall do together to continue this cause.

Q Thank you. The Syrian Interior Minister committed suicide. What are the consequences for Syria if they are implicated in the murder of the former Lebanese Prime Minister?

So we have a lot of expectations for Syria beyond just the Mehlis report. But let's see how the Mehlis report -- what it says. In the meantime, we'll continue to work with friends and allies to send a clear message to the Assad government there are expectations involved for countries that want to be accepted in the international community.

Q It's a question for President Bush. Mr. President, we thought that your last summit between America and Russian leaders, American diplomacy was stepping up the pressure on Moscow in reference to causes of democratic reforms in that country and the situation in Chechnya. And right now we have a long list of problems between Poland and Russia. So what's your point of view and what would be your advice for a new Polish government how we should handle that situation?

THE PRESIDENT: We've got -- I've got good relations with President Putin; America has got a working relationship with Russia. And always, as a part of our discussions with Russia is my personal -- when I have personal discussions with him, I remind him of my deep faith in democracy, and the people that interrelate with Russia from my government remind their Russian counterparts about democracy and its importance.

So we've got a consistent message to Russia, and that is that one should not fear democracy, one should embrace democracy. Now, having said that, I recognize that Russian democracy will be different from the United States. We don't expect every country to look like us; we just expect people to embrace some universal truths -- the right of people to worship freely, the right of women to be able to equally participate in society -- which is the case in Russia, of course -- the rule of law, the respect for private property. These are fundamental, basic principles that we believe should be inherent in all societies. People need to make those choices themselves, but one of the roles of the United States is to remind people about how beneficial a democratic society can be to its people. And so we're consistent in our message.