For Immediate Release
Office of the First Lady
October 11, 2005

MRS. BUSH: Well, I appreciate it. And thank you all for everything you're doing -- it's really so important -- and especially getting the word out so that other men who are fearful about getting involved in the life of their children and it's just easier to pretend like they don't have kids and to go on with their own life hear that so they'll feel that responsibility, and also know what a reward it is. 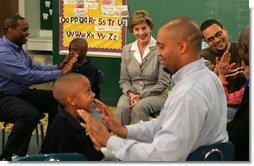 And this is what I know now, as the mother of 24-year-olds, is how fast it goes. And what you do really regret at the end is the time that you were busy and you did something else, which you can't even remember now what that was, instead of sitting when they would still sit on your lap, and you can put your arms around them.

And so it goes really quickly. And for those few early years especially, if parents will put aside their own needs a little bit and pay attention to their children, there's still plenty of time in life to be self-centered after that if you want to be. But I think you make such a huge difference in the life of your children.

And I am seeing around the country -- you're talking about the African American community, the fatherless community -- and it's certainly not just in the African American community, it's everywhere. But I am seeing young people, young men especially, who I think are -- realize the disadvantage and the loss of growing up without a father and are making an effort to be involved in the life of their children. And I think that's really good.

And there's one other interesting thing, when you were talking about the benefits of a father. There's also an economic benefit. Boys who grow up with a dad know jobs. They know their dad's friends. They have many more options for a job for themselves because they have been around men and they've seen jobs that their dad or other people have done. And so there really is -- that's another way out of poverty, is to end up with the skills, because you know you might want to do something, that you have an option, you think of something that you're interested in, that you want to do for a job. So that -- there's also an economic benefit in the end.

Thank you all so much. You're all examples for all of us, you really are, and for everyone in our country. 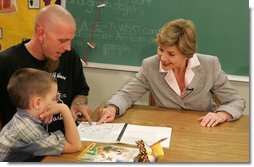