For Immediate Release
Office of the Press Secretary
October 9, 2005

U.S Assistance for Earthquake in Pakistan

THE PRESIDENT: I would like to thank the Pakistan Embassy for coming by to brief me on the tragedy that has taken place in that country. I was just told that this is going to be the worst natural disaster in the nation's history; thousands of people have died; thousands are wounded, and the United States of America wants to help. 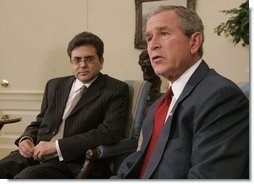 I spoke to President Musharraf. I expressed our nation's deepest condolences. And I told him that we want to help in any way we can. To that end, we've already started to send cash money and other equipment and goods that is going to be needed to help the people in Pakistan. Moving eight choppers over; the Chargé told me that one of the biggest concerns for the government of Pakistan is not enough airlift capacity to get to some of these rural areas where people are suffering. So we're moving choppers.

Finally, as I told the President -- President Musharraf -- I said there are a lot of Americans who will be asking for the Almighty God's blessings on the people of Pakistan.