For Immediate Release
Office of the Press Secretary
October 5, 2005

THE PRESIDENT: I just had a briefing from Secretary Rumsfeld and General Pace on our ongoing operations in the western part of Iraq. As you know, we're on the offense against insurgents and terrorists. We fully understand they intend to disrupt the constitutional process, or will try to do so, as well as stop the progress of democracy. And part of the way the Pentagon and the folks on the ground are going to deal with it, is to stay on the offense, and that's what's taking place. 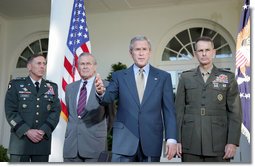 I was also pleased to hear there are 3,000 Iraqi forces in the fight; that they're doing a fine job out there, that they're -- they make a difference on the battlefield.

We also have General Petraeus with us, who has served incredibly well in Iraq. His job was to help U.S. forces and coalition forces train the Iraqis so they can take the fight to the enemy. He briefed me, and will be briefing the country at the Pentagon here a little later on, about the strong progress that we're making; that we've recruited a lot of folks, but we've got more than just recruitment going on. We've got a quality control program in place to make sure that the troops we train are capable of taking the fight to the enemy. Over 30 percent of the Iraqi troops are in the lead on these offensive operations. We've got troops embedded with them and it's important for the training mission.

But, nevertheless, the Iraqis are showing more and more capability to take the fight to the enemy. And that's how we're going to succeed in helping democracy become established in Iraq. I've told the American people all along our troops will stay there as long as necessary. We'll do the job, we'll train these folks, and as they become more capable, we will be able to bring folks home with the honor they've earned.

So on the one hand, we're making progress when it comes to training Iraqis to take the fight to the enemy, we're bringing the enemy to justice, we're on the offense. On the other hand, democracy is moving forward in a part of the world that is so desperate for democracy and so desperate for freedom.

And so, General, I want to thank you for your service -- General Petreaus.

THE PRESIDENT: I'm proud of you. Thank you all, very much. 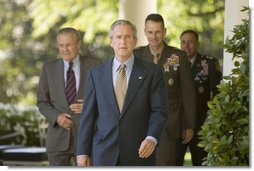