For Immediate Release
Office of the Vice President
October 3, 2005

THE VICE PRESIDENT: Thank you, General. I just wanted to stop by for a second and thank you for all your good work. We've been heavily focused, obviously, the last few weeks on Katrina. The President gets briefed on it every morning, as part of the regular morning brief, and I know you guys did a lot of great work down there. 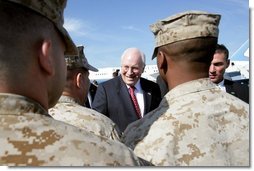 I got down a couple of times to Gulfport and the Gulf Coast and New Orleans and looked at all of that, and it really was a remarkable storm that went through, did enormous damage, but you guys did tremendous work, and we really appreciate it.

So on behalf of the President and the country, thanks very much for what you did for all of us. Good luck. (Applause.)