For Immediate Release
Office of the Press Secretary
September 27, 2005

THE PRESIDENT: I just met with local county judges and mayors, along with the Governor. Obviously this area is hurt. The Governor knows that. I saw it firsthand how it's hurt. We've got some priorities that we're in the process of working together to achieve. The first is food and water. The second is electricity and generators moving this way, there's a rational plan to distribute the generators. Thirdly, there's fuel. We fully understand that it's hard to maintain order if you don't have fuel for your cars and first responders. 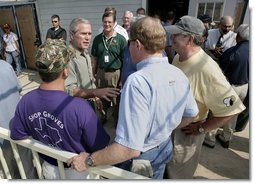 And I appreciate the planning that the Governor put into this. The state of Texas is -- took precautions before the storm hit and is now responding. And our job is to work with the state. I have the top people here with me, the Coast Guard Admiral, who is in charge of the federal response. I had the head of FEMA with me, and I had a three-star Army general here, all of them here to help make sure these people can get their lives back together.

Again, the Governor has got a plan to make sure people don't come back too early. He's listening to the local judges and the mayors. Obviously, we want people to come home as quickly as possible. We want them to be able to do so in an orderly way. And when they get home, they find that there's a -- you know, as best as possible, power and water.