For Immediate Release
Office of the First Lady
September 27, 2005

MRS. BUSH: I wanted to thank everybody for coming out today while I was here in Biloxi. People from around the world and around the country can see what the destruction is here behind me. But I want to tell you that I feel encouraged. I met a lot of people whose houses were lost here in Biloxi and other places along the Gulf Coast and in Louisiana. And they -- because they have gotten so much help from so many people, they feel optimistic, they feel hopeful that they'll be able to rebuild and rebuild their lives. 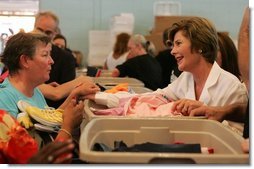 So one of the reasons I wanted to come here specifically today was to talk about partnerships. We have the big Sears truck here. Sears has brought in new clothes. They were sorted by size so people can really get to the clothes and get clothes for their children and their families. School started yesterday in Biloxi, so children are going back to school and they need clothes for school.

I met different Army Corps of Engineer people here who are doing the Blue Roof project, putting -- helping people put the tarps on their roofs who also have come from around the country.

This is what it's going to take. It's going to take partnerships between governments, between corporations, between individuals, faith-based groups to make sure all of these people will really be able to rebuild their lives.

So I'll take questions at the next stop. Thank you all for being here with me.