For Immediate Release
Office of the Press Secretary
September 25, 2005

THE PRESIDENT: Yes, having said that about Katrina, there were still some amazingly heroic efforts in pulling people off roofs. I don't know how many sorties were flown -- there must have been thousands of sorties.

GENERAL WHITE: As I left last Wednesday, it was close to 18,000 sorties flown. Now, sir, that includes every agency, and it's a lot of the airlift in there, too. 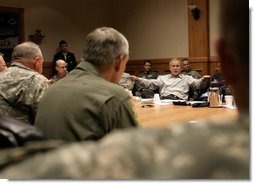 THE PRESIDENT: Your point is, on a Katrina, had there been a better coordinated effort between Guard choppers -- Coast Guard choppers, regular army choppers, it would have been less dangerous?

GENERAL WHITE: It would have been a better orchestrated plan. You wouldn't have seen a lot of -- for instance, one of the things that we've learned out of that -- we had someone that needed to be rescued, and that comes up on the net. Five helicopters show up at the same place to get one person. That's the sort of simplistic thing we'd like to avoid, and we're not maximizing the use of our forces to best efficiency.

Certainly, that was a train wreck that we saw in New Orleans, and I know everybody is jumping in, trying to help at one time, and that's the right thing to do. But if we can have a national plan that would address the search and rescue at this magnitude, is what we're out to try to do.

GENERAL MAYES: Sir, if I might add, I would say that it wouldn't necessarily make it less dangerous. I would tell you the professionalism and the plan came together. I believe that all participants would agree that with the fog that we had, and the weather that we were battling, nighttime, all the things that went into that environment, that I'm not sure we can make it less dangerous. There may be a factor there, but the main point would be, with a national plan, we'll have a quicker jump-start, and an opportunity to save more people. That would be my input there.

GENERAL CLARK: A national plan, good training against the plan, gets you to this state faster in extremis. And that's the goal.

THE PRESIDENT: Part of the reason I've come down here, and part of the reason I went to NORTHCOM, was to better understand how the federal government can plan and surge equipment, to mitigate natural disasters. And I appreciate very much, General, your briefing, because it's precisely the kind of information that I'll take back to Washington to help all of us understand how we can do a better job in coordinating federal, state and local response.

The other question, of course, I asked, was, is there a circumstance in which the Department of Defense becomes the lead agency. Clearly, in the case of a terrorist attack, that would be the case, but is there a natural disaster which -- of a certain size that would then enable the Defense Department to become the lead agency in coordinating and leading the response effort. That's going to be a very important consideration for Congress to think about.