For Immediate Release
Office of the First Lady
September 24, 2005

MRS. BUSH: Good morning, and welcome to the White House. I want to thank Dr. James Billington and the Library of Congress staff who have worked so hard to organize this, the fifth National Book Festival. They worked hard all the other four years, as well, but we're really excited about this year. And a special thanks to all of our sponsors for your generosity. 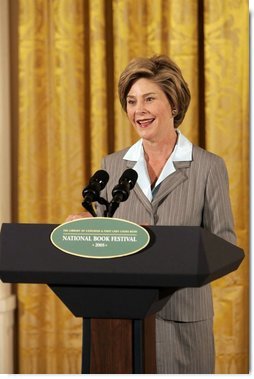 And as we gather here, though, today in Washington, we're thinking about the people on the Gulf Coast who are again enduring a hurricane. So many people have suffered hardship, and this year, the National Book Festival will collect donations for First Book to help schools and libraries along the Gulf Coast replace ruined books and replenish their shelves. You can make your donation if you go to the Pavilion of States and go to the Alabama, Mississippi, Louisiana booths, and you'll see a place to make a donation to First Book. Our goal is to be able to purchase five million books to replenish those books along the Gulf Coast.

Great books have brought many people through difficult times. A story's setting -- real or imagined -- can provide a much-needed escape. And the characters in a good book are like old friends by the time we turn the final page.

John Adams, the first resident of this house, once advised his son, and I'll quote, "You will never be alone with a poet in your pocket." Today is a chance for people to discover novelists, poets, historians, biographers and illustrators who will become constant friends.

Every year, the National Book Festival draws enthusiastic crowds of book lovers to the National Mall. One woman who's traveling from Hampton, Virginia, summed it up nicely when she said, "It's very exciting to see so much talent in one place." 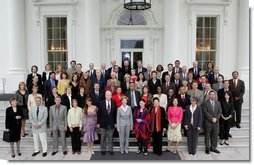 Now it's my pleasure to introduce a man who has devoted his life to writing, teaching and sharing the resources of America's great library, the Librarian of Congress, Dr. James Billington. (Applause.)