For Immediate Release
Office of the Press Secretary
September 20, 2005

THE PRESIDENT: I want to thank the folks here at the Folgers plant for inviting us to come to say hello. The reason I've come with the Mayor and Admiral Allen is because I want the people to know that there's progress being made in this part of the world. We've got some people working here because of the ingenuity of the plant managers. Behind me you see temporary housing -- this company has provided housing for the folks who work here. 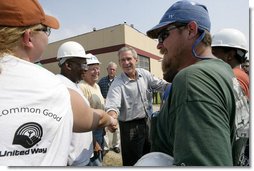 THE PRESIDENT: And FEMA helped with that. And what you're beginning to see is a revitalized economy. Progress is being made toward meeting the Mayor's vision of a -- and my vision, and everybody's vision involved with this -- of a vibrant New Orleans and surrounding parishes.

The other thing, I've just come from a briefing about Hurricane Rita -- or Storm Rita, now a category two hurricane -- and we were watching very closely, of course, its track. All up and down this coastline people are now preparing for what is anticipated to be yet another significant storm. Admiral Allen is going to stay in charge of the Louisiana/Mississippi area. We've got another admiral who is now being stationed in Texas, to coordinate the relief -- the relief -- response. We've got military assets that are being taken out of the New Orleans area, out of harm's way, and will come back in behind the storm, to follow up where it's needed.

I've been in touch with the Governor of Texas. I've been briefed on the planning for what we pray is not a devastating storm -- but there's one coming. And I appreciate the Mayor recognizing that, and he made a wise decision to say to people, be cautious about returning here, because a rain of any amount could cause these levees to break again.