For Immediate Release
Office of the First Lady
September 19, 2005

MRS. BUSH: Well, thank you all. Thanks for coming with me today. And we've seen three terrific sites. I want to say, as a Texan, how proud I am of my state, and how proud I am of Houston. And the response from the people of Houston has been really terrific. 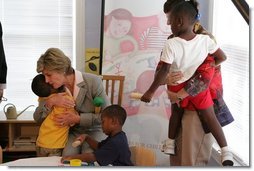 At the George Brown Convention Center we saw the faith-based and community-based groups that came together with the political leadership of Houston to -- and of the state -- to make sure that as people came in, they got medical help, they were treated right away with medical help, they were fed. It was fun today to get to be in the line as we served the food. But I also know that that George Brown Convention Center closed down as a shelter, that people have found homes, they've moved into hotel rooms, and they're resuming their lives as best they can.

Then we went next to the House of Tiny Treasures, where we saw children in school there, at that location. Those were children of homeless, and now, of course, many of these evacuees are homeless. And while they are looking for jobs, while they're looking for sustainability in their life, they have a very safe place for their little children to be, where any of their children's needs will be addressed, including meals every day, and a curriculum that tries to deal specifically with problems that little children might have in this sort of disaster and this homelessness that they have right now.

And now, we're at a corporation, a big American corporation, that has done everything they can to help their employees whose stores that they worked in before have been damaged by the hurricane. And as these employees have moved to Houston or to other cities, they've been able to come right back to work.

Keith is a kitchen designer -- I don't know if you heard him say that at the first. And he of course does want to go back to New Orleans, but right now he's got a job here. He's been able to find a place to live. Genelle is -- wants also at some point to go home, but she's got a child who is a junior in high school, so she knows now she'll be here for a couple of years while he graduates, does his junior and senior year before he goes on to college.

But I particularly want to commend the faith- and the community-based groups that have been the leadership group here in Houston to make sure the evacuees from the whole Gulf Coast have the help they need, the medical help, the financial help, the emotional and spiritual help, as well, that's come from the -- certainly from the faith-based groups.

I want to commend the political leadership. Mayor White has done a terrific job. Judge Eckels has done an unbelievable job, the state government, as well. Of course, our two Senators and our Congressman, I want to thank them for everything they've done to make sure Texas can be a welcoming place for the people who have moved from the Gulf Coast. 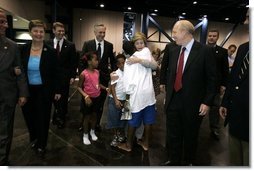 And then finally, I want to thank the corporate citizens, our corporate citizens around the country. There are many, many corporations, including Home Depot, that have done everything they can to help people get jobs, to make sure their employees who are unemployed right now because of their -- losing their -- where they worked on the Gulf Coast, are still taken care of in some way, up to including being employed in other stores. And there are a number of corporations that have done that, as well as Home Depot.

Home Depot, of course, has a special importance because of what we're going to need as we rebuild in New Orleans, rebuild all along the Gulf Coast, what people need when they know a hurricane is on the way; they need to be able to come to stores like Home Depot so they can board up their houses and do all of those things.

Q Mrs. Bush, last week, after the President's address, there are still a lot of people who are very frustrated with the federal response and frustrated that the President hadn't come to see them in the shelters. Can you respond to those frustrations?

MRS. BUSH: Well, the President, as you know, has visited a number of shelters up and down the Gulf Coast, twice in New Orleans and several times in Mississippi. I think he's going to be coming to Texas over the weekend to visit shelters here.

The government response is going to be -- is going to take a long time. We're going to have many, many months of continuing to work to make sure everybody gets what they need, they get their FEMA money so they can stay in hotels, they get their FEMA debit cards, which a whole lot of people already have gotten. There will be unemployment; Social Security Administration has got to deliver Social Security checks to people; the Postal Service is still registering people to make sure they have their new address so their mail can come to them at their new address. Health and Human Services -- the Department of Health and Human Services has sent public health officers around the south, around the disaster area. 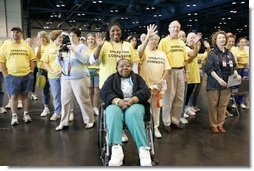 But let me say, the people in -- the doctors and the nurses in Houston went to work right away. They didn't wait for the public health officers who were being mobilized and coming in from around the country. They responded like we know every single community in the United States would respond if all of a sudden they had a big group of people who were evacuated from a disaster area.

Q You made a comment earlier that this shows the world what Americans can do if they work together.

But with this huge outpouring -- and not only of people coming to work, but people have also sent in tons of supplies. I think there -- Judge Eckels can answer this, but I think there are lots of clothes --

MRS. BUSH: Which shows how the community responded and how many people gave things.

Q Mrs. Bush, can you say why you wanted to come here to Houston today? And what have you learned after your visits today?

MRS. BUSH: Well, I went first to Lafayette, Louisiana; that was the first shelter I visited. And then I went with the President to Baton Rouge to the community center -- the command center that was set up in Baton Rouge for Louisiana. And then I went to Mississippi next to see the -- to visit a school, actually, that had taken in a lot of evacuees and visited a big shelter that was run by a faith-based community in this little town in Mississippi.

But of course, as a Texan, I really wanted to come to Texas. I read the newspapers, I knew what was going on all over the state, but particularly in Houston. But not, in anyway, to deny that Dallas and San Antonio and a lot of other cities, large and small in our state, also stood up and are helping people as much as they can.

Q What will you tell the President?

MRS. BUSH: Well, I'll tell him about everything I see. I'll go home after this and tell him tonight when we have dinner about what's going on here. He's very aware of what's going on in Houston. He's in contact with the political leadership here, as well as, of course, of course, knowing what everybody knows, what everyone has seen on television about what's going on in Houston and all over Texas, and the other states. I think around 47 states have some people who are evacuees. I went to Des Moines, Iowa, and who would have thought it -- this was really at the very first -- and they already had 12 kids in their school district that had come up from the Gulf Coast to go to school.

Q Tell us the importance of kids -- evacuees getting their kids into school.

And it's also important for all the kids of Texas -- and I want to say this to all of them -- when you have children come to your school that have been evacuated from their homes in New Orleans or the Gulf Coast, welcome them with open arms. They are little kids who have suffered a lot. They've lost, in many cases, all of their possessions. Some of them have lost their pets. And it's really important for the boys and girls of Texas to welcome them in a very special way, and to look out for them and do what you can to make them feel at home.

Thanks, everybody. Thanks for going with me today.