For Immediate Release
Office of the First Lady
September 16, 2005

MRS. BUSH: Thank you all for -- I know this isn't the first day most of you have been here at the National Center for Missing and Exploited Children. This is such a very important part of reuniting families all the time, but especially now in the aftermath of Hurricane Katrina when we have so many families who were separated from each other. And each of us who have children know what it's like to lose your child for a minute in a department store, so we can imagine what these families are feeling and what they're thinking if they've been separated from their children for the last week or so.

One of my favorites stories of the reunification here was about a little boy named Lacor (phonetic), who was picked up walking on Interstate 10 in New Orleans and taken by some good samaritans to a shelter. He was five years old, but his mother had taught him his name and her name and the name of his church and his address. And so he could give those to the people that found him at the shelter, and because of that, they were able to reunite him with his mother.

So that's a very good reminder to all of us that we need to teach our children, as soon as they can talk, their name, our name, their address, and any other things that will help them be found in case they're ever lost in a park or lost at a fair, or, God forbid, lost in something like this natural disaster.

So I want to encourage parents around the country to use this as a good reminder to let your children know what your name is and what their name is so they can help themselves if they ever need help.

Another great story they told was about a little two-year-old who wouldn't talk to anyone. And when their team went up to her in the shelter, they took a picture with a polaroid and they handed her her own picture, the picture of herself, and she said her name -- Gabby. And when she did that, then they knew one thing about this two-year-old and they were able to -- because just knowing her name was Gabby, be able to find her and find her mother.

So I want to thank them. I know you all know all this because you've probably covered this here, but all of these people, and many who are in the shelters on the Gulf Coast now working, are retired law enforcement. They're retired FBI, they're retired police, they're retired Secret Service. And they volunteer their time -- all the time, not just during these times, but other times here at the Center for Missing and Exploited Children, to make sure children are found and reunited with their families.

And I want to thank them from the bottom of my heart for what they do. I think -- and Ernie can tell you -- but I think there are about 2,000 children still whose names are on a list as being missing. I think they've reunited over 700. So hopefully in the next few days a lot more of these cases will be solved, families will be reunited.

Q Mrs. Bush, how do you think the President did last night?

MRS. BUSH: I think he did great last night. I think it was a very heartfelt speech; I think people know that. And everything he said, what he's going to work on, what each of the agencies can do to prepare for something else like this is really important. And the rebuilding is vitally important to our country, to rebuild the Gulf Coast, to rebuild one of the great cities of the world -- New Orleans. And I thought the setting last night at Jackson Square was a really good setting for all of us to remember how beautiful New Orleans is and how important it is to rebuild that city.

Q Do you think the -- what is perceived by many as a slow federal response to this disaster and slow response by law enforcement might have contributed to the number of missing children?

MRS. BUSH: I don't know about that. There's -- certainly, there's certain -- maybe it could have. But also, when you think of the scope of a disaster this size, this huge, the cleanup area is the size of England. And to imagine families in this sort of disaster, it's very -- when you think about taking your own child to the grocery store and getting separated from them in the grocery store, you can imagine what it would be like in a situation like this.

But it's also a really good reminder to all of us to have a plan with your family, in case there's ever any sort of natural disaster or other sort of disaster so that you know where your children are and you can reunite at some point.

Q Your feelings on coming here today, are you more hopeful for these children --

MRS. BUSH: Well, I am hopeful. I mean, I really am. When you see all these people working on it, I feel hopeful that people will be reunited. We all pray for that. And right now, as many of the shelters are -- people are moving out of the shelters into apartments and into hotel rooms, we know that the crowds will disperse and that might make it a little more difficult to find people. But I hope people will stay in contact with the hotline; if they're missing a child or missing family members, let the hotline know.

There's also a hotline -- is there a separate hotline for adults, missing adults?

MR. ALLEN: No, they're calling in here.

MRS. BUSH: Calling in here, as well. So I hope the people will continue to stay in contact until they find their family members that they're missing.

And we just hope that one part of the family is in a shelter in Lafayette and the other part is in Houston and that people will really have a chance to reunite. And that's what has been the case on the families that they've reunited already. 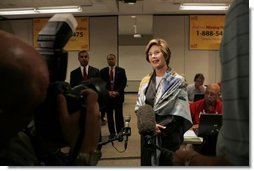 Q Besides these centers here, what else can people do, just average people, to try to help?

MRS. BUSH: Well, people are doing everything. It's amazing what people are thinking of doing -- fundraisers, which is very important. I think that's really important. I think there are also ways we can encourage people at shelters. I know that a lot of people in this area are going to the D.C. Armory. They're going to the places where the nursing home from Louisiana was moved out here to work with those retired veterans and comfort those retired veterans. I think that's very important.

There are a million ways people can help, by giving money, by giving support to all these people. We can certainly, across the country, volunteer in the schools where children have gone into the schools, the schools that have taken children from the Gulf Coast.

There's a website that the Department of Education has, "Hurricane Help for Katrina," on the Department of Education's website, where schools who have taken children from the Gulf Coast area can post what they need, and then other people can look at what they need, and corporations or individuals can meet specific needs in those schools. So I hope people will think about that, look at that.

Thank you all, thanks so much. And thank you for covering this, because I think it's really important for families to know about. So if they're missing a family member, they can call and hopefully be reunited right away by the website where people are registered from the different shelters.