For Immediate Release
Office of the Press Secretary
September 16, 2005

Proclamation: National Day of Prayer and Remembrance for the Victims of Hurricane Katrina

Proclamation: Honoring the Memory of the Victims of Hurricane Katrina

THE PRESIDENT: On this Day of Prayer and Remembrance, our nation remains in the shadow of a storm that departed two weeks ago. We're humbled by the vast and indifferent might of nature, and feel small beside its power. We commend the departed to God. We mourn with those who mourn, and we ask for strength in the work ahead.

The destruction is immense, covering a city, a coastline, a region. Yet the hurt always comes down to one life, one family. We've seen the panic of loved ones separated from each other, the lonely pain of people whose earthly possessions were swept away, and the uncertainty of men and women and children driven away from the lives they knew. Many did not survive the fury of the storm. Many who did ask, why -- and wonder, what comes next.

In this hour of suffering, we're prayerful. In a wounded region, so many placed their faith in a God who hears and helps. And so many are bringing their grief to a Savior acquainted with grief. Our nation joins with them to pray for comfort and sorrow, for the reunion of separated families, and a holy rest for the ones who died.

Through prayer we look for ways to understand the arbitrary harm left by this storm, and the mystery of undeserved suffering. And in our search we're reminded that God's purposes are sometimes impossible to know here on Earth. Yet even as we're humbled by forces we cannot explain, we take comfort in the knowledge that no one is ever stranded beyond God's care. The Creator of wind and water is also the source of even a greater power -- a love that can redeem the worst tragedy, a love that is stronger than death.

In this hour of suffering, our nation is thankful. We have been inspired by acts of courage and goodness: Coast Guardsmen and military personnel reaching out of helicopters and lifting victims from rooftops; firefighters wading through mud and debris to search for victims and survivors; doctors and nurses defying danger so their patients might live. Many of those who saved others lost their own homes and were separated from their own families. And many stories of heroism and rescue will never be told because they are known to God alone.

We're thankful for a spirit seen across the Gulf Coast that faces the worst and chooses to hope. We're thankful, as well, for the many ordinary citizens who heard the cries of neighbors and answered them. Across the country, Americans saw the hungry and gave them something to eat; saw the thirsty and gave them something to drink; saw strangers and invited them in. One man who was rescued and given shelter after the storm said, "I didn't think there was so much love in the world."

In this hour of suffering, our nation is also mindful of the work ahead. Through this tragedy great duties have come to our nation. The destruction of this hurricane was beyond any human power to control, but the restoration of broken communities and disrupted lives now rests in our hands. And we accept this responsibility not as a burden or a chore, but as an opportunity to serve our fellow Americans, as they would do for us.

This task will measure our unity as a people. Americans of every race and religion were touched by this storm; yet some of the greatest hardship fell upon citizens already facing lives of struggle -- the elderly, the vulnerable, and the poor. And this poverty has roots in generations of segregation and discrimination that closed many doors of opportunity. As we clear away the debris of a hurricane, let us also clear away the legacy of inequality. Let us deliver new hope to communities that were suffering before the storm. As we rebuild homes and businesses, we will renew our promise as a land of equality and decency. And one day, Americans will look back at the response to Hurricane Katrina and say that our country grew not only in prosperity, but in character and justice.

On this National Day of Prayer and Remembrance, we pledge ourselves to the demanding work of revival, and renew the faith and hope that will carry that work to completion. In the worst of storms, and in the rush of flood waters, even the strongest faith can be tested. Yet the Scriptures assure us, "many waters cannot quench love; neither can the floods drown it."

So now we go forward, confident in the good heart of America, and trusting that even among the ruins, the love of God remains at work.

May God bless and keep the souls of the lost. May His love touch all those in need, and may He always watch over the United States of America. God bless. 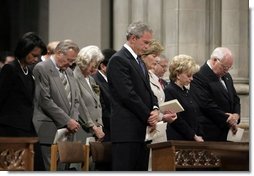