Lynne Cheney, author, scholar, and wife of Vice President Dick Cheney, today celebrated National Constitution Day with 180 elementary school students from Fairfax County Public Schools at George Washington's Mount Vernon Estate. Constitution Day 2005: Telling America's Story is Mrs. Cheney's fourth annual Constitution Day event honoring September 17, 1787, the day the Constitution was signed. In 2001, she announced plans for an annual celebration of Constitution Day to highlight the importance of learning about America's Founding Fathers and documents, as well as the inspirational figures who have since helped our nation live up to the ideals contained within the Constitution. The inaugural event took place at the Vice President's Residence in 2002. 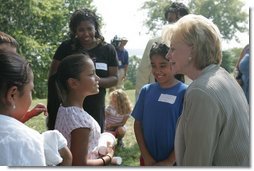 "I think it is vital to teach children about one of our nation's most influential documents and the people who shaped it." Mrs. Cheney said. "George Washington played a critical role at the Constitutional Convention and his influence helped secure support for the adoption of the Constitution by the states."

"Every time the Founding Fathers needed someone to unify this fledgling nation, they turned to one man - George Washington," said Mr. Rees. "One of Washington's greatest accomplishments was bringing together disparate personalities and agendas at the Constitutional Convention to create a lasting document which guides our democracy today." 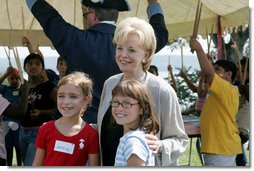