For Immediate Release
Office of the First Lady
September 15, 2005

MRS. BUSH: Thank you. Thank you, Mrs. Kagame. Thank you also for your kind words of condolence and sympathy for the people in my country who are suffering now because of Hurricane Katrina. I want the world to know how meaningful it is that so many countries have offered us encouragement and aid and are standing with us during this time of such a great natural disaster. So thank you all. Thank you for your friendship, and thank you for your words of support. 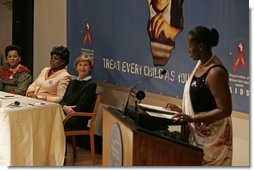 I also want to thank you for asking me to speak here to the Organization of African First Ladies Against HIV/AIDS. I had a wonderful visit to Rwanda and Tanzania and South Africa when I was in Africa this summer. And I'm delighted to welcome each one of you to the United States.

I want to acknowledge each one of the first ladies of the African countries, the ones on the steering committee, as well as all of the rest who are here. And I want to thank you for your good work.

I want you to know how encouraged I am by your strategy to reach out to adults, to appeal to the conscience of adults, to make sure they can protect children, and that everyone is united, all adults worldwide, united to protect children from HIV/AIDS, and from any other risky behavior that we want children to avoid. It's the very same goal, similar goal, that I have in an initiative that I'm working on right now in the United States called Helping America's Youth.

Your organization represents a commitment on the part of Africans to confront one of the most tragic public health problems the world has ever faced. AIDS affects tens of millions of lives, and more than 60 percent of people living with HIV/AIDS live in sub-Saharan Africa. Those are daunting figures, but Africa is not alone in dealing with this crisis. Nations around the world are affected by AIDS. Experience teaches us that we can turn the tide on this epidemic, and compassion calls us to work in partnership to alleviate suffering around the world because of HIV/AIDS.

In 2003, President Bush announced a five-year, $15 billion plan to fight AIDS in some of the most afflicted countries, including many in Africa. The President's Emergency Plan for AIDS Relief supports care and treatment for people affected by HIV, and helps to prevent further transmission of the disease.

Today, people are learning to live with AIDS, rather than preparing to die from it. Many people are getting tested, and they're revealing their diagnosis. Through their courage, they're breaking down stereotypes and stripping away the stigma that's often attached to AIDS. Most hopefully, pregnant women with HIV know that their babies can be born free from the disease. 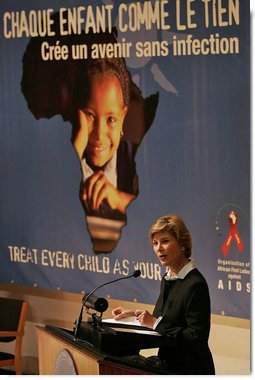 In South Africa, I visited with women who are HIV-positive at the Mothers to Mothers-to-be program. Women at Mothers to Mothers-to-be are getting treatment they need to live productive lives, and to prevent passing the virus on to their unborn children. Women also receive support and encouragement as they reveal to their families that they have HIV/AIDS. One woman I met told me that when she told her family she was HIV-positive, her sister began crying and admitted that she also was HIV-positive. And then her brother admitted that he had AIDS. Because of one woman's courage, a whole family is receiving treatment.

In Rwanda, some 700,000 children are orphans, because their parents were either killed during the genocide or have died of AIDS since then. I met with a young girl, Tatu, who had lost her father in the genocide and lost her mother to AIDS. Tatu, who is only 12 years old, now takes care of her three brothers, ages eight, six, and three.

Tatu told me her story of caring for her mother as she died of AIDS, and then having to quit school to care for her little brothers. Despite their young lives, they are now getting help and support from a local church in Kigali that receives U.S. funding through the World Relief organization. The church is providing housing for Tatu and her brothers and is helping get the children back in school.

Education, especially for girls, is an important part of our campaign to increase understanding of how HIV can be prevented and how it can be treated. Educated girls are more likely to know what HIV is and how to avoid it. They learn the attitudes and the skills that enable them to resist peer pressure. And they have hope for a better future, which reinforces the importance of taking responsibility for their own lives. In fact, educated young women have lower rates of HIV/AIDS, healthier families, and higher rates of education for their own children.

In Ethiopia, for example, the Emergency Plan supports the "Positive Change" program that provides school kits, including uniforms, book packs, and school supplies, for orphans and vulnerable children. "Positive Change" also provides skills training for out-of-school orphans. And in Zambia, Emergency Plan programs provide thousands of two-year scholarships to orphans who have lost one or both parents to HIV/AIDS.

President Bush's African Education Initiative is providing $200 million over four years to improve primary education and increase access to education for girls. In June, the President announced an additional $400 million for the continuation of the African Education Initiative over the coming four years. This will improve the quality and accessibility of basic education for millions of children in sub-Saharan Africa.

The U.S. Agency for International Development administers the African Education Initiative. Over the past three years, USAID has worked closely with African education leaders to train more than 220,000 African teachers in 16 countries and to develop and distribute more than two million textbooks. In addition, more than 85,000 girls have benefited from scholarships through the Ambassador's Girls' Scholarship Program.

As girls and women are empowered by education, they must also be protected from violence. Violence against women is an outrage that afflicts every society. Women who've suffered from violence are vulnerable and afraid. And violent acts deny our basic rights to safety and security. All people have the responsibility to stop the abuse of women wherever it occurs. And as women, we especially have a responsibility to speak up for our sisters, our mothers, our daughters, and to ensure equal justice for women.

In South Africa, new partnerships between law enforcement authorities and healthcare providers make it possible for women to talk about the crimes against them in a safe environment. In many places, women who are raped can report to a clinic or a hospital. They can undergo testing for DNA evidence and they can help prosecute their attacker. They can get clean clothes at the hospital, and then a chance to heal.

President Bush has proposed $55 million to support African programs that promote women's justice and empowerment. We want to increase awareness of the need for justice for women and strengthen the capacity of countries' legal systems to protect women and to punish violators.

Ending domestic violence, rape, and sexual abuse is essential to fighting the spread of HIV/AIDS. Women who have control over their own lives -- including economic power and social respect -- have a greater ability to protect themselves against HIV.

The successful ABC model of HIV prevention that was pioneered in Africa is most effective when both partners are on an equal footing. ABC stands for Abstinence, Be faithful, and correct and consistent use of Condoms. When women are respected and have legal protection in their community, they have more of a chance to adhere to the ABC model, and more of a chance to convince their partners to adhere to it, as well.

By partnering with African governments and the African people, the United States is playing a key role in bringing an end to the tragedy of HIV/AIDS. By promoting education, empowering women, and respecting the traditions and the teachings of local cultures, we can realize the goals of African First Ladies Against HIV/AIDS: no new infections among youth.

Thank you very, very much for your diligent work. It's urgent, and I want to thank you for your dedication and your commitment. And thank you especially for your friendship. (Applause.)