For Immediate Release
Office of the Press Secretary
September 14, 2005

THE PRESIDENT: Thank you, Madam President. I appreciate all the members of the Security Council for participating in this Summit. Our presence here reaffirms the seriousness of the challenges we face, and our determined -- determination to confront them.

We meet just over two months after the terror attacks in London, one year after the terrorist massacre of schoolchildren in Beslan, and four years after the terrorist attack in this city. Acts of terrorism like these emerge from a radical ideology that tolerates no dissent, and justifies the murder of innocent people as the best way to achieve its goals. 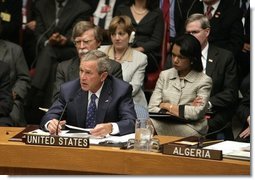 Today we support a resolution sponsored by the United Kingdom that condemns the incitement of terrorist acts, and calls on all states to take appropriate steps to end such incitement. I want to thank the Prime Minister and his government for their hard work on this issue. The United States of America strongly supports the implementation of this resolution.

We must do all we can to disrupt each stage of planning and support for terrorist acts. Each of us must act, consistent with past Security Council resolutions, to freeze terrorists' assets; to deny terrorists freedom of movement by using effective border controls and secure travel documents; to prevent terrorists from acquiring weapons, including weapons of mass destruction. Each of us must act to share information to prevent a terrorist attack before they happen. The United States will continue to work with and through the Security Council to help all nations meet these commitments.

The United States also reaffirms its commitment to support the prevention of unjust armed conflict, particularly in Africa -- which is why we have joined Algeria, Benin, and Tanzania in co-sponsoring today's second important resolution. We support the need to improve the ability of the African Union and sub-regional organizations to deploy both civilian and military assets to prevent such conflicts. Over the next five years, the United States will provide training for more than 40,000 African peacekeepers as part of a broader initiative by the G-8 countries. We will help train African forces to preserve justice and order in Africa.

Terrorism and armed conflict are not only threats to our security, they're the enemies of development and freedom for millions. To help ensure the 21st century is one of freedom, security, and prosperity -- I want to thank the members of the Security Council for supporting today's resolutions. 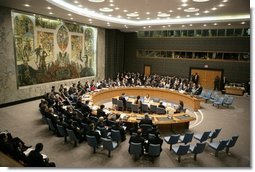