For Immediate Release
Office of the First Lady
September 14, 2005

MRS. BUSH: Thank you very much, Andrew Natsios. Thank you very, very much for all your comments just then. Madame Mkapa from Tanzania, I want to welcome you here. And also the ministers and the representatives from Uganda and Angola.

The accord that will be signed this evening will have a dramatic impact on the health of the citizens of Tanzania, Uganda, and Angola. 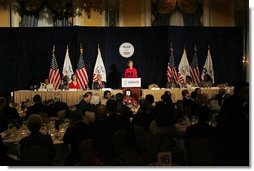 Ann Veneman, Executive Director of UNICEF, thank you so much for being here tonight. Thanks also to the representatives of the World Health Organization, the Global Fund, and all of the other very distinguished guests who are here.

And a special word of thanks to Bonnie McElveen-Hunter. Bonnie, as you heard earlier, is the President of the American Red Cross. The Red Cross is the face of compassion and hope in emergencies around the world -- and of course here in my own country. Along the Gulf Coast right now, the Red Cross is providing food, health, shelter, and in many places, a shoulder to cry on as the victims of Hurricane Katrina rebuild their lives. And it's very comforting to know that the Red Cross will be with them each step of the way. So thank you, Bonnie. And please thank your entire organization for giving people hope in this most terrible tragedy. (Applause.)

This evening is about hope -- hope because the world is speaking with one voice to address problems that have taken too many lives: malaria and HIV/AIDS. In July, I visited Africa, some countries in Africa, including Tanzania, and I saw firsthand this hope for myself. President Bush's Emergency Plan for AIDS Relief is working with our partners and friends in host nations to support each country's own strategy for HIV/AIDS through prevention and treatment. Success in this fight is possible when everyone works together.

In South Africa, I visited with women who are HIV-positive at the Mothers to Mothers-to-be program. Many people live with AIDS in silence. They're afraid to confront the stigma associated with HIV or AIDS. And they worry about being rejected by their family and their friends. Women at the Mothers to Mothers-to-be project find the courage to reveal their HIV status. They're getting the treatment they need to live productive lives, and to prevent passing the virus on to their unborn children.

One woman that I met told me she went to her family to reveal that she was HIV-positive. And she called all of her family together, and as she told them, her sister began crying and admitted that she, too, was HIV-positive. And then her brother admitted that he had AIDS. Because of this one woman's courage, a whole family is now receiving treatment. They're learning to live with AIDS, instead of waiting to die from it. 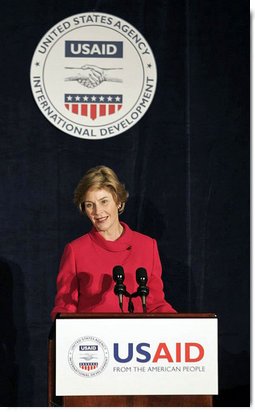 These are some of the success stories that are bringing hope to people across the continent of Africa. And I know that you could tell me many, many more. These stories give us confidence that our next partnership -- to stop malaria -- will succeed.

Now in the United States, malaria is virtually unheard of, but in fact, in the past, malaria was a problem also here. One story -- maybe it's apocryphal -- was that for many, many years, ambassadors to the United States got hardship pay to serve in Washington, D.C., because of the heat in the summer and because of the outbreaks of malaria in Washington.

Over the decades, science and technology advanced. Malaria was eradicated in the United States and it became scarce even in many regions of the tropics. Yet parts of Africa never saw this progress, and as the disease evolved and medications became less effective, malaria has taken a growing toll on African nations. Today, malaria is the number one killer of children in Africa. Each year, more than a million people die of malaria. The overwhelming majority of vic! tims are children under the age of five. And the saddest fact of all is that malaria is largely preventable.

We have the knowledge and the technology to prevent infections and to effectively treat people who have malaria. With this knowledge comes the obligation to act.

In June, President Bush announced a new commitment to combat malaria. His proposal calls for an additional $1.2 billion over the next five years. The money will pay for insecticide-treated nets, it will allow for indoor spraying against mosquitoes, and it will provide effective new combination drugs to treat malaria. Our goal with this new funding is to reach more than 175 million people in 15 nations. That represents 85 percent of the most vulnerable people in those countries -- children under the age of five, pregnant women, and people living with HIV/AIDS. By forming partnerships like this, like the one that we're creating tonight, we can expand the available resources and cover all the vulnerable people in highly endemic countries in Africa. This is an enormous undertaking, but it's within reach.

Prevention is our number one priority. The best forms of prevention are long-lasting insecticide-treated nets and insecticide sprays. In Angola, UNICEF distributes nets for children who receive routine immunizations. Next June, nets will be distributed by the Red Cross at the nationwide measles vaccination campaign. The nets will be free for every caretaker with a child under five and to pregnant women. Private companies like ExxonMobil subsidize the distribution of nets through the antenatal and other health c! linics. USAID and the government of Angola are also planning spraying campaigns in several provinces this year.

In Uganda, families with children or pregnant women will receive free nets distributed through volunteer organizations. Within the next six months, every household with a child under five on the island of Zanzibar in Tanzania will have a long-lasting net to protect each family.

We welcome and encourage the efforts of other governments and private partners that are using their funds to fight malaria. And we recognize that economic growth and development go hand in hand with finding new treatments for disease and abolishing the conditions in which disease flourishes.

One of the most promising new treatments that Andrew mentioned for malaria is made from wormwood, a wormwood extract, a plant that until recently only grew in Vietnam and China. USAID, in partnership with the private sector, is making it possible for more farmers in Africa to grow wormwood, improving their economic livelihood, and making the medicine available in nations where malaria is at its worst.

Partnerships are vital in eradicating malaria. President Bush and the U.S. government are pleased to work with the governments of Angola, Tanzania and Uganda to move forward on the first phase of the anti-malaria initiative. Together, we will implement this initiative as quickly as possible so we can save the most lives. And together, we will give people and nations renewed hope for a healthy future.