For Immediate Release
Office of the Press Secretary
September 6, 2005

THE PRESIDENT: Thank you all for coming. My message to the Cabinet this morning is this: This administration is not going to rest until every life can be saved; until families are reconnected; until this recovery is complete. Our goals -- our immediate goals are these: We want to complete the search and recovery; we want to restore essential services; we want to drain the water in the affected areas and begin removing debris; we want to -- and all are assessing public health and safety matters. 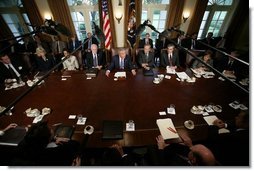 I've asked the Vice President to go down to the affected region on Thursday. He will go down to assess our recovery efforts. He will help me determine whether or not we're meeting these goals. He'll work with Secretary Chertoff and others to make sure that we remove any obstacles, bureaucratic obstacles that may be preventing us from achieving our goals. In other words, bureaucracy is not going to stand in the way of getting the job done for the people.

Now, we understand people are scattered out across the country, but we have an obligation to make sure that whether a veteran's benefit or an unemployment benefit or a Social Security benefit gets to these people. And so we will have a strategy in place and we're going to implement that strategy -- to find people who are in those shelters or in churches or in private homes -- and get them the benefit.

A lot of people are doing good work. We've got a heck of a lot more work to do, and that's exactly what this government is going to do.

Q Do you intend to replace any from your administration who are leading this recovery effort, who were part of the effort last week that has been so widely criticized?

THE PRESIDENT: What I intend to do is lead a -- to lead an investigation to find out what went right and what went wrong. And I'll tell you why. It's very important for us to understand the relationship between the federal government, the state government and the local government when it comes to a major catastrophe. And the reason it's important is, is that we still live in an unsettled world. We want to make sure that we can respond properly if there's a WMD attack or another major storm. And so I'm going to find out over time what went right and what went wrong. 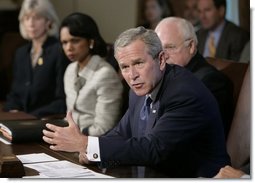 Q Secretary Chertoff has talked about being disturbed at the information -- or lack of information to the state from the region. Just from what you know initially, do you think that more went wrong at the local or state level or the federal level? And do you think there should be a commission to sort it out?

THE PRESIDENT: I think one of the things that people want us to do here is to play a blame game. We've got to solve problems. We're problem-solvers. There will be ample time for people to figure out what went right and what went wrong. What I'm interested in is helping save lives. That's what I want to do. And I want to make sure those poor folks who have been taken out of their communities and who -- who live in a -- whose world has been shattered get the help they need. And then we want to help New Orleans rebuild, and we want to see Biloxi rise again.

And, you know, I was with the mayor of Waveland the other day, from Mississippi. His town was completely destroyed. What I'm interested in is helping that man and that community get back on their feet. That's where my focus is. There will be ample time to assess -- and we need to assess. And this administration will be part of the assessment as to what went wrong, because, I repeat, we've got to have as good a relationship as possible with all levels of government to be able to respond to major problems. And if things went wrong, we'll correct them. And when things went right, we'll duplicate them.

Q Mr. President, on the Supreme Court, do you have a candidate in mind? And now that you have a second opportunity, are you more inclined to follow the First Lady's advice and choose a woman?

THE PRESIDENT: First of all, I'm proud of my nominee to be the Chief. And the goal is to get this good person confirmed by the time the Court convenes this fall. See, they're going to need their Chief. And, therefore, the Senate needs to have a -- obviously, a thorough debate about Judge Roberts and get him confirmed quickly, so that when the Court convenes there is a Chief Justice. And I was deliberate in my process last time; I'll be deliberative this time. I obviously interviewed a lot of good candidates last time; I still will continue to reach out and make sure every good candidate is considered.

THE PRESIDENT: The list is wide open, which should create some good speculation here in Washington. (Laughter.) And make sure you notice when I said that I looked right at Al Gonzales, who can really create speculation. (Laughter.)

I'm not through yet. But this is important for people to understand. I want the Senate to focus not on who the next nominee is going to be, but the nominee I've got up there now. And it's important for the country that they complete the work. And in the meantime, the country can be assured that I'll take a good, long look at who should replace Justice O'Connor. I called her from Air Force One yesterday and told her of my decision to name John Roberts to be the Chief. And her first reaction was that she better get back to doing her homework, and she said so somewhat tongue in cheek, but she's right, she'll be there when the Court is seated with a new Chief Justice. And then we'll move deliberately to replace Justice O'Connor.