For Immediate Release
Office of the Press Secretary
September 4, 2005

THE PRESIDENT: Our nation is saddened today by the news that Chief Justice William Rehnquist passed away last night. Laura and I send our respect and deepest sympathy to this good man's children, Jim, Janet, and Nancy. We send our respect to all the members of the Rehnquist family.

William H. Rehnquist was born and raised in Wisconsin. He was the grandson of Swedish immigrants. Like so many of his generation, he served in the Army during World War II. He went on to college with the help of the G.I. Bill. He studied law at Stanford University. He graduated first in his class, that included his future colleague, Sandra Day O'Connor. Judge Rehnquist, and his late wife, Nan, raised their family in Phoenix, where he built a career as one of Arizona's leading attorneys. He went on to even greater distinction in public service as an assistant U.S. attorney general, associate justice of the Supreme Court, and for the past 19 years, Chief Justice of the United States. 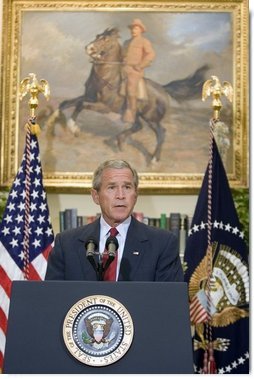 He was extremely well respected for his powerful intellect. He was respected for his deep commitment to the rule of law and his profound devotion to duty. He provided superb leadership for the federal court system, improving the delivery of justice for the American people, and earning the admiration of his colleagues throughout the judiciary.

Even during a period of illness, Chief Justice Rehnquist stayed on the job to complete the work of his final Supreme Court term. I was honored and I was deeply touched when he came to the Capitol for the swearing-in last January. He was a man of character and dedication. His departure represents a great loss for the Court and for our country.

There are now two vacancies on the Supreme Court, and it will serve the best interests of the nation to fill those vacancies promptly. I will choose in a timely manner a highly qualified nominee to succeed Chief Justice Rehnquist. As we look to the future of the Supreme Court, citizens of this nation can also look with pride and appreciation on the career of our late Chief Justice.

More than half a century has passed since William H. Rehnquist first came to the Supreme Court as a young law clerk. All of his years William Rehnquist revered the Constitution and laws of the United States. He led the judicial branch of government with tremendous wisdom and skill. He honored America with a lifetime of service, and America will honor his memory.

May God bless the Rehnquist family. Thank you all very much. 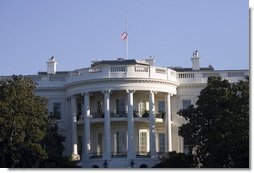