THE PRESIDENT: Secretary Chertoff and I just finished a meeting with Secretary Rumsfeld, General Myers, other members of my Cabinet, as well as General Honore, Admiral Keating, who is in charge of NORTHCOM -- General Honore who is our active duty general on the ground in Louisiana, as well -- and Mike Brown, who is the head of FEMA. 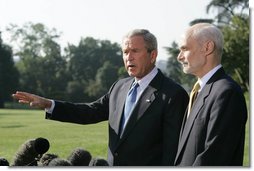 There's a lot of aid surging toward those who have been affected: millions of gallons of water, millions of tons of food. We're making progress about pulling people out of the Superdome. There's an issue right now at the convention center of New Orleans that General Honore briefed us on. We're trying to get food and medicine to the convention center. He's working with the governor, and the adjutant general, and the mayor, to deploy 600 of the newly arrived MPs to secure the site, so that the food and medicine and water can get in there. 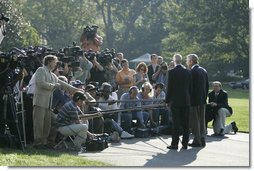