THE PRESIDENT: The Governor and the Mayor of New Orleans, Senator Landrieu, Senator Vitter and Congressman Jefferson, Congressman Jindal and General Blum and I have just completed a tour of some devastated country. I started in Alabama, and worked our way down through Mississippi, and ended up here in one of America's great cities, and saw first-hand the devastation that this city has gone through. I know the people of this part of the world are suffering, and I want them to know that there's a flow of progress. We're making progress. I want to thank the Governor for her hard work, and I want to thank the Mayor. 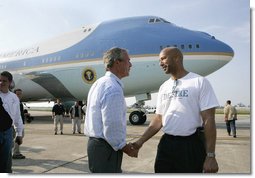 I know that some of the folks in the outlying parishes here in Louisiana are wondering whether or not people are paying attention to them. We are. St. Charles, St. Bernard, Plaquemine Parish, I understand the devastation that you've gone through as well. So does the Governor --

THE PRESIDENT: St. Tammany. So does the Governor, and so are the senators. This is a devastating storm. This is a storm that's going to require immediate action now. I'm pleased to report, thanks to the good work of the adjutant general from Louisiana, and troops that have been called in, that the convention center is secure. One of the objectives that we had today was to move in and secure that convention center, and make sure the good folks there got food and water.

The caravans -- the bus caravans are continuing on, as is the airlift. The people of this part of the world have got to understand -- and by the way, we just came from the 17th Street levee. A lot of folks are working hard to repair that levee. They've been working around the clock, 24 hours a day. People from the federal government and the state government and the local government are working to breach that -- to fill that breach. The Mayor has been telling me, not only by telephone, but here in person, how important it is that we get that breach filled and get that pump station up and running. And we went there to inspect the progress being done, and the people of New Orleans have got to understand there's a lot of people working hard, and they're making good progress.

You know, I'm going to fly out of her in a minute, but I want you to know that I'm not going to forget what I've seen. I understand the devastation requires more than one day's attention. It's going to require the attention of this country for a long period of time. This is a -- one of the worst natural disasters we have faced, with national consequences. And therefore, there will be a national response. And I look forward to continuing to work with the governor and the mayor and the members of the Senate and the House of Representatives to do our duty to help the good folks of this part of the world get back on their feet.

May God bless the people of this part of the world, and may God continue to bless our country. Thank you very much. (Applause.)