For Immediate Release
Office of the Press Secretary
September 1, 2005

THE PRESIDENT: Good afternoon. Thanks for coming. I'm honored to be with former Presidents Bush and Clinton. Thank you all for being here. We just spent some time talking about the devastation caused by Hurricane Katrina. I brought them up to date on what I know about the latest developments there on the ground. We're united in our sympathy; we're united in our determination to help the good people that have been affected by this hurricane. 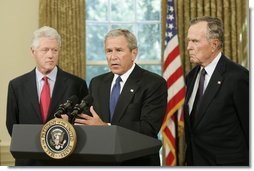 I want to make sure I fully understand the relief efforts and the extent of the relief efforts and the progress of the relief efforts. After all, we're dealing with one of the largest relief efforts in our nation's history, and the federal government has got an important role to play. Our first priority, of course, is to save lives. There are over 80 FEMA teams that have been deployed to the Gulf Coast to conduct search and rescue missions. I want to thank those who are working long hours for their dedication to saving lives. We've got Coast Guard folks and Navy and Army and Air Force and National Guardsmen from many different states that are delivering needed supplies and providing the rescue missions, trying to reach those in danger.

We're working hard to repair the breaches in the levees. Federal, state, and local agencies are also cooperating to sustain life. That means getting food and water to those who are stranded. Medical personnel and local officials are helping hospital patients and people gathered in the Superdome to evacuate. Again, I want to thank the folks in Texas for welcoming those people. Bus caravans are shuttling back and forth between Houston and New Orleans to get those folks to Houston. Law enforcement and National Guardsmen and local leaders are working to restore public order.

Earlier today, General Blum, along with Mike Chertoff, gave me a briefing about the number of Guards-folks trained in police work that will be moving into New Orleans, as well as other law enforcement officials from around the area. As we speak, people are moving into the New Orleans area to maintain law and order. I thank them for their good work. Government agencies are working with faith-based and community groups to find shelters for thousands of displaced persons.

And finally, we're moving forward with a comprehensive recovery strategy. We're working hard to restore electric power, repair transportation infrastructure, restart energy production, and of course, strategize as to how to provide housing for these folks. I met with Chairman Greenspan at lunch, as well as the economic team, to evaluate the impact of Hurricane Katrina. We particularly spent a lot of time talking about the damage done to our energy infrastructure and its effect on the availability and price of gasoline.

In our judgment, we view this storm as a temporary disruption that is being addressed by the government and by the private sector. We've taken immediate steps to address the issue. The Secretary of Energy is approving loans of crude oil from the Strategic Petroleum Reserve. The EPA has provided a temporary nationwide waiver for fuel requirements so supplies of gasoline can move more easily within our country and so that we can attract more gasoline from overseas.

We're also working with energy companies to repair and reactivate major refineries and pipelines. The good folks must understand that major refineries have been shut down, which means it's going to be hard to get gasoline to some markets. We're working to help these pipelines get up and running. Pipelines carry refined product.

And so we're working with the majors -- major oil companies to get the -- with Colonial Pipeline so they can carry the products of the major oil companies, the refined products. Right now, the Colonial Pipeline, which is a major pipeline serving the East Coast, is back in operation, but only at 50 percent capacity. We anticipate that as the days go by, more and more of that capacity will be restored. Other major pipelines are coming back online. But as I said, we're going to have a temporary disruption of gasoline product.

Another challenge we face is that the downed pipelines are causing the need to transport gasoline to needed markets by ship. Under current law, shipping between American ports can only take place on American ships, and there are currently not enough American ships to move the oil and gasoline to where it's needed. So today I've instructed Secretary of Homeland Security Chairman Chertoff to temporarily waive this requirement, so foreign ships can also help distribute oil and gasoline to where it's needed. Today's action will further help us move gasoline to accommodate the demands of the American citizens.

Steps we're taking will help address the problem of availability, but it's not going to solve it. Americans should be prudent in their use of energy during the course of the next few weeks. Don't buy gas if you don't need it.

This recovery is going to be a long process. It's going to take a lot of hard work and patience and resolve. It's also going to require a lot of money. And the federal government will do its part. But the private sector needs to do its part, as well. And that's why I've asked Presidents Bush and Clinton to lead a nationwide fundraising effort to help the victims of Hurricane Katrina.

In the days ahead, the former Presidents will ask Americans to open their hearts and their wallets to help those in need. And they're going to talk to large corporations and small businesses and individual citizens across the nation. The contributions will benefit the relief organizations that are doing vital work on the ground. We're going to take a look and make sure that the money raised is money needed. Right now if our fellow citizens want to help, they ought to give a cash donation to the Red Cross, which they can find at phone number 1-800-HELP-NOW.

I was so proud of the efforts that President Clinton and President Bush did to help the victims of the tsunami relief. Our country marveled at their capacity to rally our citizens and to work together. And, once again, I've asked them to work to help the needs of those who hurt. And, once again, I'm confident that the American people will respond.

I know this is an agonizing time, or we all know this is an agonizing time for the people of the Gulf Coast. I ask their continued patience as recovery operations unfold. I can assure them that the thoughts and prayers of the entire nation are with them and their loved ones. I'm also confident that when it's all said and done, the efforts to rebuild the great city of New Orleans and to rebuild those communities in Mississippi and to help the folks in Alabama will make this nation a stronger place.

May God bless you all.