For Immediate Release
Office of the Press Secretary
August 1, 2005

THE PRESIDENT: Nearly five months ago, I nominated John Bolton to be America's Ambassador to the United Nations. I chose John because of his vast experience in foreign policy, his integrity and his willingness to confront difficult problems head-on. I told the nation that John Bolton would provide clear American leadership for reform at the United Nations. I told them that he would insist upon results. 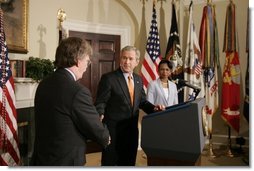 The United States Senate held thorough confirmation hearings, and a majority of United States senators agree that he is the right man for the job. Yet, because of partisan delaying tactics by a handful of senators, John was unfairly denied the up or down vote that he deserves.

As a result, America has now gone more than six months without a permanent ambassador to the United Nations. This post is too important to leave vacant any longer, especially during a war and a vital debate about U.N. reform. So today I've used my constitutional authority to appoint John Bolton to serve as America's Ambassador to the United Nations. John Bolton will be an important member of my State Department team, led by Condoleezza Rice.

I'm sending Ambassador Bolton to New York with my complete confidence. Ambassador Bolton believes passionately in the goals of the United Nations Charter, to advance peace and liberty and human rights. His mission is now to help the U.N. reform itself to renew its founding promises for the 21st century. He will speak for me on critical issues facing the international community. And he'll make it clear that America values the potential of the United Nations to be a source of hope and dignity and peace.

As he embarks on his new assignment, Ambassador Bolton will bring tremendous wisdom and expertise. Over the past two decades, John Bolton has been one of America's most talented and successful diplomats. He's been a tireless defender of our nation's values, and a persuasive advocate for freedom and peace. As a senior leader at the State Department in the 1980s and 1990s, he brought people together to achieve meaningful results at the United Nations -- from resolving payment issues, to helping rally the coalition in the Persian Gulf War, to repealing a shameful resolution that equated Zionism with racism. And over the past four years as Undersecretary of State, he's shown valuable leadership on one of the most urgent challenges of our time: preventing the spread of weapons of mass destruction.

Ambassador Bolton takes up his duties at a time of opportunity for the United States and the United Nations. America and the U.N. are working to spread democracy, relieve hunger, and assist the victims of disaster. We've delivered hope to millions suffering from HIV/AIDS and other deadly diseases. We've helped to lay the groundwork for two landmark events in the history of liberty: the free elections of Afghanistan and Iraq. Ambassador Bolton will work to build on that progress by helping the U.N. continue to find effective new ways to match its good intentions with good results.

As the newest member of America's diplomatic corps, Ambassador Bolton will defend our nation's interests with character and resolve that were instilled early in life. John's father was a firefighter; his mother was a homemaker who took her son to the public library to show him the value of education. I know that Jack and Virginia Bolton would be proud today to see the boy they raised in Baltimore appointed to serve as our permanent representative to the United Nations.

I'm grateful to John's wife, Gretchen, for being here with us and to the entire Bolton family for their service and sacrifice.

Mr. Ambassador, thank you for agreeing to serve your nation once again, and congratulations.

AMBASSADOR BOLTON: Mr. President; Madam Secretary; my wife, Gretchen; our daughter, J.S, in absentia. I'm profoundly honored, indeed, humbled by the confidence that you have shown by appointing me to serve as the United States Permanent Representative to the United Nations. You have made your directions for U.S. policy at the United Nations clear, and I am prepared to work tirelessly to carry out the agenda and initiatives that you and Secretary Rice direct.

We seek a stronger, more effective organization, true to the ideals of its founders and agile enough to act in the 21st century. It will be a distinct privilege to be an advocate for America's values and interests at the U.N., and, in the words of the U.N. Charter, to help maintain international peace and security.

My deepest thanks to you both for the opportunity to continue to serve America.

THE PRESIDENT: Thanks, John, appreciate you.

All right, thank you all.