For Immediate Release
Office of the Press Secretary
July 26, 2005

Anniversary of the Americans with Disabilities Act, 2005
A Proclamation by the President of the United States of America

On July 26, 1990, President George H. W. Bush signed into law the Americans with Disabilities Act (ADA). This historic legislation provides a clear and comprehensive national mandate for the elimination of discrimination against individuals with disabilities. The ADA reflects our Nation's faith in the promise of all individuals and helps to ensure that our Nation's opportunities are more accessible to all. 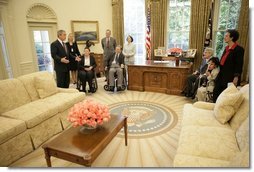 The ADA has been a great success in expanding opportunity for disabled Americans. By reducing barriers and changing perceptions, the ADA has increased participation in community life and given greater hope to millions of Americans.

Because of the ADA, individuals with disabilities are better able to develop skills for school, work, and independent living. Our Nation has more to do to further the goals of the ADA. Through the New Freedom Initiative, my Administration is building on the progress of the ADA to increase the use of technology and expand educational and employment opportunities. We are promoting the development and dissemination of assistive and universally designed technology. We have launched DisabilityInfo.gov, an online resource of programs and technology relevant to the daily lives of people with disabilities and their families, employers, service providers, and other community members. We also require electronic and information technologies used by the Federal Government to be accessible to people with disabilities. To ensure that no child with a disability is left behind, I have requested $11.1 billion for the Individuals with Disabilities Education Act in my FY 2006 budget-- $4.7 billion above the FY 2001 level. The Department of Education is seeking new and effective ways for students with disabilities to learn. My Administration is also working to educate employers on ADA requirements and further assisting persons with disabilities by implementing the "Ticket to Work" program and strengthening training and employment services at One-Stop Career Centers. Through all of these efforts, we are helping individuals with disabilities have the opportunity to live and work with greater freedom.

On the 15th anniversary of the Americans with Disabilities Act, we celebrate the progress that has been made and reaffirm our commitment to fulfilling the ADA's mission of bringing greater hope and opportunity to our Nation's disabled Americans.

NOW, THEREFORE, I, GEORGE W. BUSH, President of the United States of America, by virtue of the authority vested in me by the Constitution and laws of the United States, do hereby proclaim July 26, 2005, as a day in celebration of the 15th Anniversary of the Americans with Disabilities Act. I call on all Americans to celebrate the many contributions individuals with disabilities have made to our country, and I urge our citizens to fulfill the promise of the ADA to give all people the opportunity to live with dignity, work productively, and achieve their dreams.

IN WITNESS WHEREOF, I have hereunto set my hand this twenty-sixth day of July, in the year of our Lord two thousand five, and of the Independence of the United States of America the two hundred and thirtieth.