For Immediate Release
Office of the First Lady
July 26, 2005

MR. KENNEDY: Okay, I don't know if you can hear us in the back. We may not have a microphone that works, but we have a shuttle that works. (Applause.) I would just like to say thank you from the bottom of my heart, speaking for all Americans, for all the people of this world, for the great work you've done. Two-and-a-half years ago you committed to find the problem, fix the problem, and fly again. Ladies and gentlemen, you have flown again. Congratulations. (Applause.) 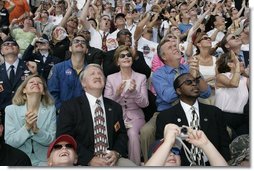 And now it is my pleasure to introduce Mike Griffin, the NASA Administrator.

MR. GRIFFIN: Thank you all for making me look good on my first time out. (Laughter.) Thank you all very much. I know what this means to you because I know what it means to me. We don't want to take a lot of time and the environment here is difficult, so let me -- I'd like to have the pleasure to introduce, first, Governor Jeb Bush, who, as always, has been a stalwart supporter of our space program, and especially of the Kennedy Space Center here in Florida; his wife, Columba, his daughter, Noelle. And for them each, we have a scarf, and for you, sir! , a tie, to remember this event.

MR. GRIFFIN: Since Governor Bush is widely known rarely to wear a tie, we think he will get a long time's usage out of this one. (Laughter.)

And the question of how to treat one's boss's wife is always important. (Laughter.) And so, for that, we have, of course, the great pleasure to have Mrs. Laura Bush here with us today, continuing the kind of support that President Bush has shown to the space program in the worst time of trial that NASA has ever had. And that support is echoed with Mrs. Bush here today, and we would like to commemorate that with a shuttle, a crystal version of the shuttle with a clock in it.

MRS. BUSH: Thank you very, very much. (Applause.) I just want to say congratulations to everybody. It was just terrific. Thank you so much for your hard work. Thank you for inspiring everyone in our country and around the world. I appreciate it very much. I am the lucky one who gets to thank you on behalf of the American people.

So thanks so much. It's so much more moving than I expected it to be. I was glad I had on sunglasses. (Laughter.) Thank you all. You're an inspiration to everyone and to the world. (Applause.)

MR. GRIFFIN: When NASA performs well, we ignite the hope and the belief of a united nation and the world, along with the space shuttle. We performed well today, and I thank you for it. (Applause.) 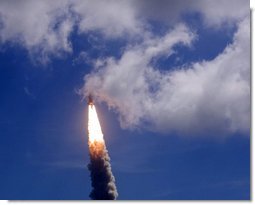