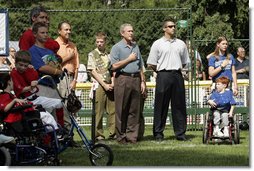 Volunteer Recognition: President Bush recognizes Dan and Paul Stroup of Falls Church, Virginia, for their dedication to making a lasting impact in the lives of children with disabilities. Dan and Paul have each volunteered more than 1,000 hours with Access, a ministry to children with special needs at McLean Bible Church in McLean, Virginia. Access serves over 700 families of children with special needs in the Washington, D.C., area and is open to persons of all faiths and beliefs. For the past five years, Dan has been a counselor for a five-week adventure camp serving children with Down Syndrome, cerebral palsy, autism, and other disorders. Paul has been a camp counselor for the past four years.

President Bush launched the White House Tee Ball Initiative to promote interest in baseball and a spirit of teamwork and service for America's youth. This is the fifth year of the President's White House Tee Ball Initiative, and this is the second game of the 2005 season. Teams are selected by Little League Baseball in Williamsport, Pennsylvania, and can be nominated online at www.littleleague.org.

What is tee ball?
Tee ball is the entry sport to baseball for young players, generally four to eight years old. Tee ball develops the primary baseball skills of hitting, running, fielding, and throwing and gives children solid teamwork experience. Tee ball is played in every state and territory and in dozens of countries around the world. Participation is estimated at 2.2 million players - 65% boys and 35% girls. Members of two teams take turns hitting a ball off a batting tee set on home plate. Batters try to get on base and advance to home; fielders try to prevent that from happening. The absence of pitching allows children to participate without the fear of being hit by a pitched ball. The players gain an understanding of the fundamental rules, which allows minimally competitive league play at all age levels.

What is the Challenger League?
Little League's Challenger Division features teams of mentally and physically disabled children. This division serves the needs of disabled children by providing the learning experience of tee ball and the camaraderie of team sports. The players range in age from 5 to 18 years old.