For Immediate Release
Office of the Press Secretary
July 20, 2005

THE PRESIDENT: Good morning, how are you? I just had a cup of coffee with the nominee and told him I thought things were off to a very good start for his nomination. I'm not surprised -- he's highly qualified for the job. He's the kind of person that will bring great dignity to the Court. Judge Roberts is off to the Senate this morning to begin his consultations. I'm confident the senators will come to realize what I've come to realize: We're lucky to have a man of such wisdom and intellectual strength willing to serve our country. 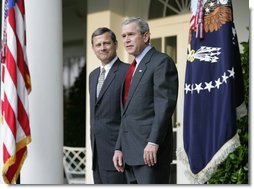 I'm also confident that the process will move forward in a dignified, civil way. In my conversations with senators last night, we discussed how important it is that Judge Roberts get a fair hearing, a timely hearing and a hearing that will bring great credit to our nation and to the United States Senate. And so I told Judge Roberts over coffee that we'll provide all the support that's necessary for the senators to be able to make up their minds, that we will push the process forward, because he and I both agree that it's important that he be sworn in prior to the Court reconvening in October, and that I wished him all the best.

So I appreciate you coming by for coffee this morning.

JUDGE ROBERTS: Thank you very much.