For Immediate Release
Office of the Press Secretary
July 19, 2005 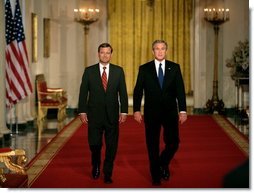 And so a nominee to that Court must be a person of superb credentials and the highest integrity; a person who will faithfully apply the Constitution and keep our founding promise of equal justice under law. I have found such a person in Judge John Roberts.

And tonight, I'm honored to announce that I am nominating him to serve as Associate Justice of the Supreme Court. John Roberts currently serves on one of the most influential courts in the nation, the United States Court of Appeals for the District of Columbia Circuit.

Before he was a -- before he was a respected judge, he was known as one of the most distinguished and talented attorneys in America. John Roberts has devoted his entire professional life to the cause of justice and is widely admired for his intellect, his sound judgment, and personal decency.

Judge Roberts was born in Buffalo and grew up in Indiana. In high school, he captained his football team, and he worked summers in a steel mill to help pay his way through college. He's an honors graduate of both Harvard College and Harvard Law School. In his career, he has served as a law clerk to Justice William Rehnquist, as an Associate Counsel to President Ronald Reagan, and as the Principal Deputy Solicitor General in the Department of Justice.

In public service and in private practice, he has argued 39 cases before the Supreme Court and earned a reputation as one of the best legal minds of his generation. Judge Roberts has earned the respect of people from both political parties. After he was nominated for the Court of Appeals in 2001, a bipartisan group of more than 150 lawyers sent a letter to the Senate Judiciary Committee. They wrote:

"Although as individuals we reflect a wide spectrum of political party affiliation and ideology, we are united in our belief that John Roberts will be an outstanding federal court appeals judge and should be confirmed by the United States Senate."

My decision to nominate Judge Roberts to the Supreme Court came after a thorough and deliberative process. My staff and I consulted with more than 70 members of the United States Senate. I received good advice from both Republicans and Democrats. I appreciate the care they took. I'm grateful for their advice. I reviewed the credentials of many well-qualified men and women. I met personally with a number of potential nominees. 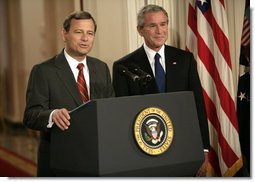 In my meetings with Judge Roberts, I have been deeply impressed. He's a man of extraordinary accomplishment and ability. He has a good heart. He has the qualities Americans expect in a judge: experience, wisdom, fairness, and civility. He has profound respect for the rule of law and for the liberties guaranteed to every citizen. He will strictly apply the Constitution and laws, not legislate from the bench.

He's also a man of character who loves his country and his family. I'm pleased that his wife, Jane, and his two beautiful children, Jack and Josie, could be with us tonight. Judge Roberts has served his fellow citizens well, and he is prepared for even greater service.

Under the Constitution, Judge Roberts now goes before the United States Senate for confirmation. I've recently spoken with leaders Senator First and Senator Reid, and with senior members of the Judiciary Committee, Chairman Specter and Senator Leahy. These senators share my goal of a dignified confirmation process that is conducted with fairness and civility. The appointments of the two most recent Justices to the Supreme Court prove that this confirmation can be done in a timely manner.

So I have full confidence that the Senate will rise to the occasion and act promptly on this nomination. It is important that the newest Justice be on the bench when the Supreme Court reconvenes in October. I believe that Democrats and Republicans alike will see the strong qualifications of this fine judge as they did when they confirmed him by unanimous consent to the judicial seat he now holds.

I look forward to the Senate voting to confirm Judge John Roberts as the 109th Justice of the Supreme Court of the United States. Judge Roberts, thank you for agreeing to serve, and congratulations.

JUDGE ROBERTS: Thank you, Mr. President. Thank you. Thank you, very much. It is both an honor and very humbling to be nominated to serve on the Supreme Court.

Before I became a judge, my law practice consisted largely of arguing cases before the Court. That experience left me with a profound appreciation for the role of the Court in our constitutional democracy and a deep regard for the Court as an institution. I always got a lump in my throat whenever I walked up those marble steps to argue a case before the Court, and I don't think it was just from the nerves.

I am very grateful for the confidence the President has shown in nominating me, and I look forward to the next step in the process before the United States Senate.

It's also appropriate for me to acknowledge that I would not be standing here today if it were not for the sacrifice and help of my parents, Jack and Rosemary Roberts, my three sisters, Cathy, Peggy, and Barbara, and of course, my wife, Jane. And I also want to acknowledge my children -- my daughter, Josie, my son, Jack -- who remind me every day why it's so important for us to work to preserve the institutions of our democracy. 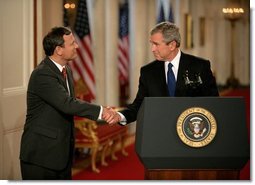 Thank you again, very much.