For Immediate Release
Office of the Press Secretary
July 18, 2005

Official Visit of the Prime Minister of India

PRESIDENT BUSH: Thank you. I'm proud to stand here today with Prime Minister Singh, the leader of one of the world's great democracies. Mr. Prime Minister, welcome to America. I applaud your vision and I applaud your leadership. Laura and I are honored to welcome you and Mrs. Kaur to the White House. 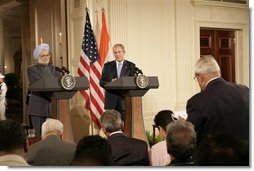 We just had a great discussion, a very frank and open discussion. And tonight we look forward to welcoming you for a little family dinner.

India and the United States share a commitment to freedom and a belief that democracy provides the best path to a more hopeful future for all people. We also believe that the spread of liberty is the best alternative to hatred and violence. Because of our shared values, the relationship between our two countries has never been stronger. We're working together to make our nations more secure, deliver a better life to our citizens and advance the cause of peace and freedom throughout the world.

The governments of India and the United States are working together to safeguard our people. We are charting new steps in our defense relationship through the recently signed new framework that will help our two nations work toward common security objectives. We're working together on counterterrorism to help protect our people and make the world a safer place. We're also committed to increasing the prosperity of the people of India and America alike. Today, we announced the completion of the next steps in strategic partnership. Completing this partnership will help us further enhance our cooperation in the areas of civil nuclear, civil space and high technology commerce.

Last month, we launched a reinvigorated U.S.-India economic dialogue to focus high-level attention on trade, finance, investment and the environment. Prime Minister Singh and I are about to meet with business leaders from both our nations who have joined us here today for the inaugural meeting of the CEO Forum. The expertise of these private sector leaders will help our two governments build trade and increase investment for the good of our peoples. Cleaner energy resources, including nuclear power, are vital for the future of both our economies. We have begun a bilateral energy dialogue to find ways to work together in this important area. Our two nations also have a common interest in bettering the lives of people around the world. We are launching a disaster response initiative to better respond to future disasters, just not in Asia, but around the world.

I appreciate Prime Minister Singh's leadership. He's a man who's committed to peace and liberty. I look forward to working with you, Prime Minister. I thank you for coming. The podium is yours.

PRIME MINISTER SINGH: Thank you very much, Mr. President. Ladies and gentlemen of the press, I would like to begin by thanking President Bush for the warmth of his hospitality and the wide-ranging discussions that we've had this morning with him. These discussions have been, indeed, very productive and focused on the future direction of a transformation in our multifaceted relations.

I am happy that the President and I share the common goal of making this one of the principal relationships for each of our countries. The President's personal commitment to this relationship is deeply admired by the people of India. The support and goodwill of the friendly people of the United States in managing the transition from a developing country to a fast-expanding economy is something we greatly welcome and greatly appreciate. The President's assurance to me that India's sustained economic growth has his strong support and support of the United States means a lot to us.

The joint statement that we have agreed upon lays out the full potential of our multifaceted cooperation. The President has accepted my invitation to visit India at the earliest, and we are confident that the results of the understanding that we have reached today would be fully evident by then.

Our partnership is one between rigorous and vibrant democracies, and we have agreed today to give expression to our shared values in a variety of ways. The President's steadfast determination and leadership in meeting the challenges of international terrorism is widely appreciated by us, in particular, but all the world, all civilized men and women all over the world. There can be no cause that justifies the killing of innocent and defenseless civilians. There must be an international norm of zero tolerance for terrorists.

Meeting global challenges requires credible and effective global institutions. Today the world is debating the reform of the United Nations. In our talks, President and I were of one mind that the contemporary reality must be fully reflected in the central organs and decision-making processes of the U.N. India has a compelling case for permanent membership of the Security Council. We are convinced that India can significantly contribute to U.N. decision-making and capabilities.

A growing Indian economy, with an accelerated growth rate averaging about 6 to 7 percent in recent years, and its integration with the world economy would expand the scope for commerce, investment and technological cooperation between our two countries. Shortly, after this press interaction, the President and I will spend a few minutes with corporate leaders from both countries of the first meeting of the CEO's Forum. This forum includes some of the best business minds of our two countries. We have announced today a series of other initiatives designed to build a long-term, knowledge-driven partnership between India and the United States. These reflect the vision that the President and I have of our shared future.

We also discussed the importance of ensuring adequate energy and affordable supplies at a time when oil prices remain high. Both of us recognize that civilian nuclear energy has a greater role in meeting global energy demands. We in India have an ambitious and attainable national road map in this regard. We look forward to President Bush's strong leadership on these important issues.

I must once again thank you, Mr. President, for the warmth of your welcome and for your deep and abiding personal commitment to the building of our partnership.

I would now be glad to take your questions.

Q Mr. President, you said you don't want to talk about an ongoing investigation, so I'd like to ask you, regardless of whether a crime was committed, do you still intend to fire anyone found to be involved in the CIA leak case? And are you displeased that Karl Rove told a reporter that Ambassador Joe Wilson's wife worked for the Agency on WMD issues?

PRESIDENT BUSH: We have a serious ongoing investigation here. (Laughter.) And it's being played out in the press. And I think it's best that people wait until the investigation is complete before you jump to conclusions. And I will do so, as well. I don't know all the facts. I want to know all the facts. The best place for the facts to be done is by somebody who's spending time investigating it. I would like this to end as quickly as possible so we know the facts, and if someone committed a crime, they will no longer work in my administration.

Would you, Mr. President, like to reaffirm the U.S. stand that the sanctity of the line of control cannot be violated by anyone in future in the interest of the peace? Mr. President.

PRESIDENT BUSH: Well, U.S. policy has not changed. This problem will be solved by India and Pakistan. And our role is to encourage the leaders from both countries to work in good faith to solve this long-standing problem. And I am pleased with the progress being made, as should the people of India. I think the people of India ought to applaud strong leaders that are willing to work to achieve peace. And I think -- I think we have an opportunity to help facilitate the dialogue on this long-standing issue.

But the truth of the matter is, in order for there to be a solution, the Prime Minister, representing the great people of India, and President Musharraf, representing the people of Pakistan, are going to have to come to a mutually acceptable agreement. To the extent we can help, we're more than willing to try to help. But we're not a party to the agreement, of course. I'm hopeful -- I'm hopeful -- I'm hopeful that the progress achieved thus far can be continued. And I applauded the Prime Minister in my private meeting with him for taking a step toward peace.

THE PRESIDENT: Yes, thanks.

Q Thank you, Mr. President. We understand you are now close to a decision on a Supreme Court nominee.

Q Have you narrowed down the list and met with finalists? Will you now share the list with Senate leaders to avoid a confirmation battle, as Democrats have proposed?

THE PRESIDENT: Well, thank you for telling me where I am in the process. I appreciate that. We've consulted with the Senate. We will continue to consult with the Senate. I, of course, am the person that picks the nominee, and they get to decide whether or not the nominee gets confirmed. That's the way it has worked in the past. That's the way it's going to work in this administration.

And of course I'm reviewing a different candidate. I'm reviewing their curriculum vitae, as well as their findings. I will sit down with some and talk to them face-to-face, those who I have not known already. You know, we've got some people that -- perhaps in contention that I've already spent time with, that I know; in other words, I'm familiar with some of the people that are being speculated about in the press. And so I don't need to interview those. But of course I'm going to take a very thorough approach.

What they're referring to is a Supreme Court vacancy. And this is a really important decision. And I'm going to take my time and I will be thorough and deliberate. But make no mistake, we have heard a lot of suggestions from members of the United States Senate -- a lot. It turns out, many of the senators have got strong opinions one way or the other. And of course we're listening to them.

But my desire, Adam, is to get this process moving so that someone will be confirmed, whoever he or she is, will be confirmed by October. And if that's the backstop, we're working back to try to accommodate the Senate and their desire. Part of the consultation was to ask the senators, what's it take to get somebody in place by the October session?

Q Mr. Prime Minister, you have sought the removal of restrictions on nuclear and high technology supplies to India. After the meeting with President Bush, how do you see the prospects in this area?

PRIME MINISTER SINGH: Well, I think we have had a very constructive and productive meeting. And as you will see from the joint statement, this issue has been addressed in a manner which gives me great satisfaction. And I thank the President for his personal role and interest in facilitating a solution to this complex problem.