For Immediate Release
Office of the First Lady
July 13, 2005

Mrs. Bush's Remarks in a Discussion with Orphans and Clients of PASADA in Tanzania
PASADA
Dar es Salaam, Tanzania

DR. CORRIGAN: I'm going to start by saying that this lady here beside Mary was the first person who ever had an HIV test done in PASADA, in 1994, when we were in Karikoo, in the very beginning. And she has lived very well, and she is not yet on anti-retroviral treatment. She doesn't need them. And her daughter is, too - this is Irene, she's her daughter. 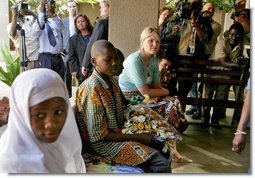 MRS. BUSH: You have a beautiful daughter.

DR. CORRIGAN: And the interesting thing you might tell your other daughter is that she had another daughter following Irene, who is not HIV-positive.

MS. LUPAPA: My name is Rehema. I was taken sick in bed three years ago, but PASADA did help me much. And I got TB. I got TB treatment, after I completed treatment I got ARV and now I'm fine, I'm doing well.

MS. LUPAPA: I'm expecting going to school for counseling so that I help other people.

DR. CORRIGAN: And this is -

MS. MHANDO: My name is Mwanahamisi Mhando. (As translated) I joined PASADA since 1994. I realized that I had a problem since 1993. I'm doing fine now. The year before last I got TB, tuberculosis - but then PASADA advised me that I should start medicine. I started taking medication and now I'm doing well.

PASADA has also given me training to do home-based care and now I do the education in the homes.

MS. MHANDO: We are doing fine, but there are problems that come up when we visit the sick in their homes. Our country is poor, and PASADA is overwhelmed by the (inaudible) government, the many people who need PASADA's services. There are people who have started taking the ARVs, but they can't even afford food at times, and we find that we have no way of helping them through. We are trying very hard, but economics just wouldn't let us do what we want to do.

MS. SARIA: (As translated.) My name is Janet Saria. I've been living with HIV since 1990. I joined PASADA in 1994. I had TB and (inaudible). PASADA has helped me so much. PASADA has helped me come back to life, to make me better. PASADA is also giving education to the orphans, but it's overwhelmed by the number of orphans. I got counseling from PASADA, to visit orphans and see the homes. And children were living with HIV. When we visit them we really feel bad, or feel (inaudible). We come to a point where we're really helpless, we have no way of helping them, and the only way we turn to God - we pray that God will help, so that we can help those that who afflicted. Others have no food. Others on ARVs. PASADA is trying hard to give the little that they can give.

We ask for your help, but we pray to God, we ask God to help us. We hope the world can also help.

MRS. BUSH: Well, the American people are committed to help.

PARTICIPANT: We're very grateful, we thank you very much. Please pray for us, and we're praying to God that God can also help you, so that you can also help us. (Laughter.)

MRS. BUSH: Thank you all. Thanks to all of you for telling us your stories; I appreciate it very much. You're also telling some members of the American press, who are behind you, so they can put your stories and your request in their newspapers.

PARTICIPANT: There are instances where when we visit the sick we really sort of give all that we have to visit.

We are in no position to help them. If we had capital or some sort of credit, that would advise them to something economical, but then we're not in a position to do that.

MRS. BUSH: Well, thank you for working with girls and women.

DR. CORRIGAN: Just to tell you that Lazaro's mother - she was a very young lady and she was Rita (phonetic), we all knew Rita very well. Before she died - Lazaro was at the funeral - before she died she came to say goodbye to all the people here. And he has been really well supported. We have known him since he was a little baby, and he's not yet needing anti-retroviral treatment and he's doing very well at school. So it can happen when the family really cares, you know?

MISS ANDREW: My name is Irene Andrew (phonetic). I live with HIV. In the beginning, I was discriminated against by my friends at school. There is a newspaper called "Famina" (phonetic) that came to give us advice and counseling. So the pupils at my school now came to understand what HIV is. They got to understand what HIV and AIDS is and they got to know that one can't be infected just by associating with someone who is HIV-positive.

Right now, I'm on ARVs. I got it from PASADA. I'm grateful I'm doing well. In the beginning, it caused some skin problems. Nonetheless, I'm not doing very well at school, because in the beginning I was really unwell. I can't even converse in English. (Laughter.)