For Immediate Release
Office of the First Lady
July 12, 2005

MRS. BUSH: Thank you all very much. Thank you, Ambassador. Thanks each and every one of you for your warm welcome. I'm so glad we could meet in this place - South Africa's Centre for the Book. As a former librarian and teacher, I believe books and learning are at the center - or should be at the center of every culture. And, of course, that's what this center is - a center to learning and books in South Africa. 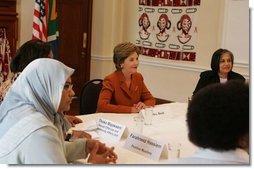 I want to acknowledge Ambassador Jendayi Frazer, our U.S. Ambassador to South Africa. Thank you, Jendayi, for the wonderful job you're doing here. We look forward to welcoming her back to the United States as the Undersecretary of State, as you heard, for African Affairs.

I also want to acknowledge Ambassador Randal Tobias, the U.S. Global AIDS Coordinator. Thank you very much, Ambassador. Elizabeth Anderson, thank you for letting us be here today to have this meeting at the Centre for the Book.

And I want to thank the women who are standing behind me, the Mothers and the Mothers-to-be Program, whom I met with earlier, and the women on the stage who participated in the discussion we just had about education and empowerment in South Africa. Both groups of women shared their stories of hope with me today.

In many parts of the world today, women are lifting their voices and are asking to be heard. Women the world over share a bond. We know that we have much to offer our communities, and that our own peoples - we want our own people to recognize the dignity and the value of women's lives. I'm proud to stand with these women.

In my country, women and people of African descent were once treated as second-class citizens, destined to serve the wishes of others rather than to achieve their own goals. Today, all Americans enjoy equality under the law, and we work each day to make equality a fact of life for every man and every woman. Our progress didn't come about because of a sudden shift in attitudes. Progress came through the persistent efforts of men and women of conscience who refused to ignore their own poor treatment, and who demanded the right to pursue their own happiness.

Today in South Africa, women are working together to speak out about the difficulties they face. And even more important, they're offering solutions. Violence against women is an outrage that afflicts every society. Women who've suffered from violence feel vulnerable and afraid. And violent acts deny our basic rights to safety and security. All people have the responsibility to stop the abuse of women wherever it occurs.

South Africans are confronting the problem of violence against women. New partnerships between law enforcement authorities and healthcare providers make it possible for women to talk about crimes - the crimes against them in safe environments. In many places, women who are raped can report that rape in a hospital. They can undergo testing for DNA evidence and they can help prosecute their attacker. They can get clean clothes at the hospital, and then a chance to heal. 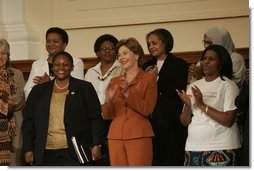 The Western Cape Network on Violence Against Women links together organizations and individuals who are working to increase awareness of violence against women and to stop it from happening. Other nongovernmental organizations are doing similar work, partnering with each other and with government to educate the public and to empower women.

President Bush recently announced that he will ask the United States Congress for $55 million to support African programs like these that promote women's justice and empowerment. We want to support efforts to increase awareness of the need for justice for women and strengthen the capacity of the legal system to protect women and to punish violators. By working together, we can expand progress in confronting violence against women throughout this country and to other nations.

Ending domestic violence, rape and sexual abuse is also essential to fighting the spread of HIV/AIDS. Women who have control over their own lives - including economic power and social respect - have a greater ability to protect themselves against HIV.

The successful ABC model of HIV prevention that was pioneered in Africa is most effective when both partners are on an equal footing. ABC stands for Abstinence, Be faithful, and correct and consistent use of Condoms. When women are respected and have legal protection in their community, they have more control over their own sexual lives, they have more options to adhere to the ABC model - and more power to convince their partners to adhere to it, too.

South Africans are making progress in the fight against AIDS, and the people of America stand with you. In 2003, President Bush announced a five-year, $15 billion plan to fight AIDS in the most afflicted countries, including many in Africa. The President's Emergency Plan for AIDS Relief supports care and treatment for people affected by HIV, and helps to prevent further transmissions of the disease. During the last two years, with a contribution of nearly $240 million, Americans have partnered with South Africa's government, hospitals, and other organizations to combat HIV/AIDS. Antiretroviral treatment has been made available to more than 44,000 people in South Africa. And more than 66,000 AIDS orphans and other vulnerable children are benefiting from our partnership.

Africa's progress is best measured in hope. Only a few years ago, people viewed an HIV-positive diagnosis as a death sentence - a sentence to be endured in shame and isolation. Today, people who are HIV-positive have hope: hope that they can watch their children grow up; hope that they will achieve their own goals and dreams for their lives; hope that we will see a generation free from HIV/AIDS, so that no one has to suffer - and no child is made an orphan by AIDS.

Today, people are learning how to live with AIDS, rather than preparing to die from it. More people are getting tested, and they're revealing their diagnosis. Through their courage, they're breaking down stereotypes and stripping away the stigma that is often attached to AIDS. Most hopefully, pregnant women with HIV know that their babies can be born free from the disease.

Earlier today I visited the Mothers to Mothers-to-be Program in Khayalitsha. The program is one of several organizations that make up the Mothers Program. Dr. Mitch Besser - who is here with us today - was an early advocate for the Mothers Program, which offers medical and emotional support, and economic opportunity to improve the lives of mothers who are HIV-positive. Last year, the Mothers Program served 2,500 women; and after expanding this year, they expect to reach 25,000 women in 2006.

Mothers to Mothers started the way so many programs do - with a few women who wanted to help themselves, help each other, and help other women in their community. Today, mothers who have HIV, and who have delivered babies free of the disease, mentor women who are HIV-positive and pregnant.

The experienced mothers teach expectant mothers about how to prevent HIV transmission. They offer guidance on health and medicine, and they emphasize the importance of adhering to treatment. They provide help with all the challenges that come with being a new mother. Women who graduate from the program are recruited to help other women. With each mother who gives birth to a healthy baby, another step is taken toward keeping the next generation HIV-free.

In 2002, Babalwa Mbono was married and pregnant with her second child. Babalwa took an HIV test and discovered that she was positive. Her husband also tested positive. Like many people, she had trouble dealing with her diagnosis. She became angry, and of course she worried about her baby. Babalwa began attending counseling sessions at the Mothers Program. She learned more about HIV, how to live with it, and how to prevent transmitting HIV to her child.

Today, Babalwa's baby is HIV-negative. And Babalwa is the senior site coordinator for the Mothers Program at Khayelitsha - sharing her personal experience and wisdom with other pregnant women. (Applause.)

Mothers like Babalwa who work at the center are paid for their continued service in the program. And through Mothers Creations, women learn how to make arts and crafts to sell in the international market. The mothers create beaded accessories - and I got a few of them today when I was there -- like cell phone holders and bookmarks and purses and belts - and these accessories are sold in South Africa, Europe, and North America. You can find products created in Khayalitsha worn around the world, including by my staff in the White House.

Women in the Mother's programs also reach out to the community, bringing HIV/AIDS awareness programs to schools and community groups. This knowledge helps other women remain free of the disease. Knowledge gives people the confidence to get tested themselves, and to find treatment and support if that test is positive.

The Mothers Programs are a South Africa success story. And through President Bush's Emergency Plan for AIDS Relief, the American people are proud to work in partnership with you to give hope to people's lives.

Thank you for showing me the confident face of South Africa's women - and South Africa's future. Your success will improve lives here at home, and it will inspire women throughout Africa to become active in their own communities - gaining strength and confidence and independence.

Thank you to each one of you, and a special thanks to the women on the stage with me. (Applause.)