For Immediate Release
Office of the First Lady
July 12, 2005

Q First of all, let me say thank you, Mrs. Bush, for allowing us to accompany you on this trip.

Q And good morning to you.

MRS. BUSH: Well, thanks for coming with me on this trip. I appreciate it.

Q Well, it's been a pleasure so far. I look forward to the rest. I guess the biggest question that people are wanting to know is, what is the goal that you have here in Africa? 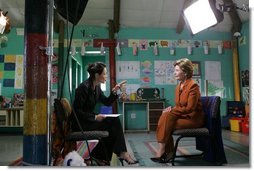 MRS. BUSH: Well, I think they're -- I think we're really seeing a difference. And not just from money that comes from the United States government and from the taxpayers, but also from many other governments that are committed to working with governments in Africa. And not only other governments, but also individuals, individual foundations. This center, where we are today, is funded by the Swedish government, by the South African government, and then by two American foundations, the Kellogg Foundation and the Kaiser Foundation. And then when we go later and see the big loom where the women are weaving, that was funded by a grant from the U.S. government.

So we're working with everyone. We want to work with governments, particularly with these governments in Africa, as they face the challenges that they face.

Q You make this visit to Africa in the wake of the bombings in London, just last week while you were at the G8 summit it Scotland. What was going through your mind during those bombings, and what did you and your husband talk about as you watched the horror unfold?

MRS. BUSH: Well, of course, what it reminded both of us of is what happened in our country on September 11th. But there was a really terrible irony in the fact that we were there at the G8, with leaders of the G8, as well as leaders from many other countries, talking about the way we can work together to alleviate poverty, to work on diseases, trying to eradicate diseases that cover Africa and many, many other parts of the world. And then the juxtaposition of that, of that constructive dialogue, of that willingness to be constructive and to try to work with each other and try to help each other, with a meaningless and brutal terrorist attack, really, in a lot of ways, I think turned people's eyes from Africa and back to terrorism. And one of the reasons that I'm really glad I had this trip planned is because we can continue to talk about ways we can be constructive and not the destruction of terrorism.

Q Let me shift for a moment to a subject that a lot of Americans care a lot about, and that is what will happen in the wake of Justice Sandra Day O'Connor retiring. Do you want your husband to name another woman to the Supreme Court?

MRS. BUSH: Sure, I would really like for him to name another woman, but -- and I admire and respect Sandra Day O'Connor so much. She's been a friend that I've loved seeing whenever I have the chance when I'm in Washington. But I know that my husband will pick somebody who has a lot of integrity and strength, and -- whether it's a woman or a man, of course, I have no idea. But I'm proud that Sandra Day O'Connor was the first woman on the Supreme Court.

Q Do you have any concerns that his choice might result in an overturning of Roe v. Wade?

Q You've been traveling in Africa with your daughters, both of them.

Q And there is a report that one of your daughters has been working in Africa to help children, volunteering, which must make your heart so proud.

MRS. BUSH: It does. I'm very proud of my girls, but I'm also really proud of their generation. And one of our daughters has been volunteering here with -- at a children's hospital, and she'll be coming home later this month. And, of course, I'm glad to have her home, but I'm very proud that she wanted to do that. And I know that so many of their friends, of my girls' friends, also have volunteered at home in the United States and around the world. And I'm really proud of American young people.

Q You know, people are seeing, they feel they see a new Laura Bush in you. There is a sense that you have become so active. I mean, I understand from your staff you've visited something like 15 countries in the last four months. You've been working for the rights and the opportunities for women, and specifically for children. Some people think you're becoming an activist. Are you an activist?

MRS. BUSH: Well, I'm an activist, sure. But actually, it's my privilege to be able to represent the people of the United States, and to let people around the world know how good the people of the United States are and how concerned the people of the United States are with all parts of the world. I hear it wherever I go; I see it wherever I go -- this morning, in the Mothers to Mothers-to-Be program that I visited, that encourages mothers who are HIV-positive to counsel other mothers who are pregnant and to help them learn how to use the treatments that keep their children from having HIV when they're born. And that makes me very, very proud, that those kind of programs are started with money from the United States taxpayers, with individuals, American individuals who are visionaries and who want to help people worldwide. And that's what I get to see and get to highlight, and that's really a privilege.

Q Well, Mrs. Bush, it's such a pleasure to speak to you.

Q And now it's time for more of Ann Curry's exclusive interview with the First Lady, Laura Bush. The First Lady is traveling across Africa on a goodwill mission, and Ann is right there with her.

Ann, good morning again to you.

Q Matt, good morning once again. Well, Mrs. Bush and I are inside, actually, a township not far from Cape Town, where we're in a community center. And it's an example, apparently, of what works, what can work in Africa to help the people.

MRS. BUSH: That's right. That's right, exactly. And this is a collaboration between the South African government, the Swedish government, American foundations. And it's a great way to actually empower women by letting women learn different skills and crafts, and then, at the same time, to rehabilitate their children who are suffering from malnutrition.

Q It's a one-stop shopping situation --

Q There's an HIV/AIDS clinic there.

MRS. BUSH: Educare. It's so cute in here. Hi, everybody.

Q -- when they first came, and they have all been rehabilitated, which is fantastic.

MRS. BUSH: They've all been rehabilitated, and they're healthy now and they're working at school and having fun.

Q Meantime, their mothers are able to go into this little area, where they're allowed to -- or they're given skills that they can use to make money.

MRS. BUSH: To actually have jobs and make money. They have silkscreen, they silkscreen fabrics, they do beading. That, actually, then gives them the independence they need to try to negotiate their own lives, and particularly their own sexual lives, which gives them a chance to either avoid HIV or to be treated.

Q This is a key issue for you.

MRS. BUSH: It's a key issue, and that is the empowerment of women and the education of women.

MRS. BUSH: And look at all the great things they've made.

Q What you see is the women are on looms here and they're making these beautiful rugs. And this is women across the -- hello, good morning.

MRS. BUSH: Hello, how are you all?

Q It's interesting, Mrs. Bush, I really get the feeling that you are -- I don't know if you realize you're doing it or not, but you're creating a legacy here. You are making this a part of your mission, this idea of helping children and women.

MRS. BUSH: Well, that's right, Ann. I mean, I'm not for creating a legacy, I'm actually doing what many, many Americans want to do and want to be able to help. And I think they can look on your website and find out about all of these great programs. And it's a privilege, it really is a huge privilege to be able to be involved in such great programs as this one, where we see the weaving that these women are doing. They're now empowered, they can make money themselves, they can have jobs and support their children. It's really very, very encouraging.

Q Well, it's a privilege for us to be along on this trip.

Q We look forward to the rest of it.

MRS. BUSH: Thanks, thanks so much, Ann.