For Immediate Release
Office of the Press Secretary
July 12, 2005

PRESIDENT BUSH: We've just had a very interesting and comprehensive discussion about our bilateral relations, which are strong. But Singapore is -- is a country that has an interesting position in the Far East. The Prime Minister brings a perspective about the U.S. role, about the future of the region that I have found fascinating. The Prime Minister is a strategic thinker. He obviously worries about the lives of the citizens in his country, daily lives in what's taking place, but he's also got the capacity to see beyond the horizon. 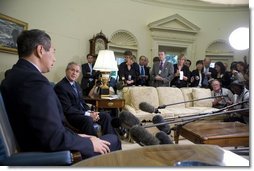 And I want to thank you for sharing your insights. I appreciate so very much your -- your advice. And I look forward to working with you. We're going to sign a very important document here, cementing our good relationship.

And, finally, the Prime Minister and I share a clear vision about the world in which we live when it comes to terror -- these terrorists that kill on a moment's notice. They don't care who you are. They want to shake our will. They want to -- they want to drive America from the world. They want the free world to retreat. They've got ideological ambitions, and it's going to require a steadfast response. And the Prime Minister understands that.

And I appreciate your strength of character and your clear vision about the dangers we face. Welcome. Glad you're here.

PRIME MINISTER LEE: Thank you, Mr. President. I'm very happy to be here to meet the President in the Oval Office. Singapore and America share many common interests and many similar perspectives on the world around us, particularly in Asia. And I've been happy to have a wide exchange of views with the President on how East Asia is developing; what's happening in Asia; how China and India are opening up and becoming influential in the region and exerting a positive influence on many of the countries; and how America can be part of Asia and engage, participating, and continuing to stabilize and to maintain the security in the region, as it has done for many years.

One aspect of security, of course, is anti-terror. And I told the President how much we appreciated America's strong, consistent stand on this, that not withstanding any -- whatever the terrorists may throw at America, that it will stay firm and there's absolute confidence that it will not waver, whether in Iraq or anywhere else in the world.

It's critical to watch because, for us, anti-terror is also a hot agenda item. So it's one of the areas of mutual interest which has lead our two countries to embark upon a strategic framework agreement which will set out the basis for us to broaden and deepen the cooperation which we already have had over these many years. And I'm very happy that today we'll have the chance to sign that agreement.

Q Mr. President, you had a meeting this morning with four leading senators. How much more input do you need before you'll be able to make a decision on this? And, you know, how close are you?

PRESIDENT BUSH: Closer today than I was yesterday. (Laughter.) I did have a good breakfast with four United States senators, the leaders of the Senate plus the heads of the Judiciary Committee. I asked their advice on a couple of matters. One, I asked their advice on the timing of a nominee. In other words, how fast could they get to the -- to the hearings necessary for a nominee's name to move forward. Obviously, we're in a very interesting period here; you got the end of the session coming up, then you got an August break. So I was just trying to get a sense of their view of the calendar. And I want to thank them for being forthright.

Obviously, they get to decide. They're the legislative branch; they get to determine how fast to move a nominee's name, or not. My only question to them is, what will it take to be able to get a person confirmed by early October.

Secondly, we talked in general about a potential nominee. They've got strong opinions, and I wanted to hear them. And they have shared some opinions with me. And, of course, they're sharing -- many senators are sharing their opinions with others on my staff. We're actively seeking recommendations.

I am going to be deliberate in the process because I want the American people to know that, when I finally make a decision, it's going to be one based upon a lot of research and a lot of thought about the character of the person, the integrity of the person, the ability of the person to do the job, and the philosophy of the person. And as you know, I campaigned twice for President of the United States, and I said, if I have a chance to name somebody to the Supreme Court, or courts in general, I'll pick people who will use the bench -- will interpret the Constitution while on the bench, but not use the bench to legislate. We've got a legislative body called the U.S. House of Representatives and the Senate. They do the legislation. And the courts will then interpret the Constitution as to whether or not the laws are constitutional or not.

Q Have you heard from your wife about her desire for you to name a woman?

PRESIDENT BUSH: My wife? Listen, I talked to her yesterday. She's in Africa on a mission of goodwill. She's talking about women's education and HIV/AIDS. Listen, I get her advice all the time. I didn't realize she'd put this advice in the press. That's -- (laughter.) She did? Well, good. I'm definitely considering -- we're definitely considering people from all walks of life, and I can't wait to hear her advice in person when she gets back. (Laughter.)

Q Can we ask some questions on Singapore? What's the significance of the agreement that's going to be signed from Singapore's perspective and from the United States' perspective?

PRIME MINISTER LEE: Well, from our perspective, it builds on a very sound relationship and broadens and deepens it further. It enables us to focus more on anti-terrorism, on anti-WMD proliferation, as well as on other aspects of our relationship -- defense technology cooperation, military cooperation between our armed forces, and strategic and security exchanges.

PRESIDENT BUSH: From our perspective, it is a -- it is a statement about how important our relations with Singapore are. We've made a statement before on economic relations when we signed a free trade agreement. And that was an important agreement. It's important for our economy; it's important for the economy of Singapore. This agreement takes our relationship beyond just economics. It's a strategic relationship. It is one that will have long-term consequences for both our peoples. But I happen to believe that it will have long-term consequences for peace in the region. And that's very important.