For Immediate Release
Office of the Press Secretary
June 26, 2005

Volunteer Recognition: The President recognizes Jeomera Ayala of Arlington, Virginia. Jeomera Fuentes-Ayala arrived at Youth For Tomorrow, a residential group village for at-risk youth (ages 11-17), in 2003. Youth for Tomorrow combines rehabilitation, faith, academics, and loving care to help youth gain the skills for future success. For the past year-and-a-half, she has been a volunteer at The Barn, an organization that provides support services and programs for homeless/battered women and their dependent children. Once per week, she visits the facility to care for children while their mothers take classes.

Commissioner: The Honorary Tee Ball Commissioner of the Game is Barry Larkin. Mr. Larkin is a 12-time All-Star who spent his entire 19-year Major League Baseball career as shortstop for the Cincinnati Reds

President Bush launched his White House Tee Ball Initiative in 2001 to promote interest in baseball and a spirit of teamwork and service for America's youth. This is the fifth year of the President's White House Tee Ball Initiative, and this is the second game of the 2005 season. Teams are selected by Little League Baseball in Williamsport, Pennsylvania, and can be nominated online at www.littleleague.org. 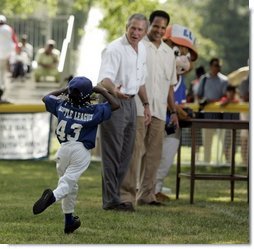 What is tee ball?
Tee ball is the entry sport to baseball for young players, generally four to eight years old. Tee ball develops the primary baseball skills of hitting, running, fielding, and throwing and gives children solid teamwork experience. Tee ball is played in every state and territory and in dozens of countries around the world. Participation is estimated at 2.2 million players - 65% boys and 35% girls. Members of two teams take turns hitting a ball off a batting tee set on home plate. Batters try to get on base and advance to home; fielders try to prevent that from happening. The absence of pitching allows children to participate without the fear of being hit by a pitched ball. The players gain an understanding of the fundamental rules.

Research has shown that children are less likely to engage in risky behaviors when they are connected to parents, family, school, community, and faith. Faith-based, community, and volunteer organizations across the nation are involved in efforts to reach at-risk youth and get them involved in their communities. The Little League Urban Initiative, now in dozens of American cities, is one of the programs working hard to accomplish these goals.