For Immediate Release
Office of the Press Secretary
June 13, 2005

THE PRESIDENT: Thank you all for coming. Welcome to the White House. I want to thank the five Presidents who are with us today: President Mogae of Botswana, President Kufuor of Ghana, President Guebuza of Mozambique, President Pohamba of Namibia, and President Tandja of Niger. 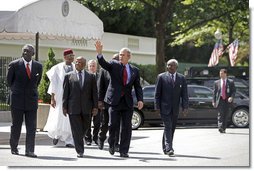 I want to thank Secretary of State Condi Rice for joining us today, and she was in the discussions we had earlier. I'm honored that the members of the Diplomatic Corps have joined us. I thank the ambassadors for being here. I appreciate members of the Congress being here: Senator Bill Frist, the Majority Leader is with us; Congressman Bill Thomas; Congressman Charlie Rangel of the Ways and Means Committee -- two fine members and I appreciate you being here as a symbol of unity and support for the -- (laughter and applause) -- for moving the trade agenda forward. I appreciate Congressman Jim Kolbe from Arizona for being here, as well. Thank you all for coming, really are honored you're here and I know the Presidents are, as well.

That was certainly the idea behind the African Growth and Opportunity Act, a bipartisan act, an act of the United States Congress that recognized this fact. You see, AGOA is promoting democratic reform in Africa by providing incentives for these nations to extend freedom and opportunity to all of their citizens. Under this law, African nations can obtain greater access to our markets by showing their commitment to economic and political reform, by respecting human rights, tearing down trade barriers, and strengthening property rights and the rule of law, which is precisely what the leaders of these five nations are doing.

Because AGOA is producing results, I've twice signed into law provisions that build on its success and extend its benefits long into the future. My predecessor worked with the Congress to get the law passed, I have been honored to work with the Congress to extend the good law. And the reason why I feel confident in going to the Congress is because it has worked. It's a good piece of legislation that has made a difference in people's lives. 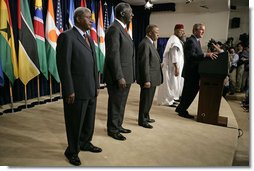 Over the same period, interestingly enough, U.S. exports to sub-Sahara Africa were up 25 percent. In other words, this is a two-way street. Not only have folks in Africa benefited by selling products in the United States; American businesses, small and large, have benefited through the opening of the African market, as well. Across sub-Sahara Africa, economic growth increased to an eight-year high. Real per capita income increased by 2.7 percent, and this growth is expected to continue in 2005. By creating jobs and lowering prices and expanding opportunity, AGOA is today developing benefits for Americans and Africans alike, and that's important for our fellow citizens to understand. Trade is beneficial for the working people here in America, just like it's beneficial for people on the continent of Africa.

We will continue to work for policies that build on these impressive results. In December, I announced that 37 African countries are now eligible for AGOA benefits, and next month in Senegal, senior ministers from my administration will meet with government ministers from these 37 AGOA nations to build on this progress. These representatives will be joined by hundreds of American and African businesses and private organizations who will discuss ways to promote development and strengthen civil society.

As we expand our trade, the United States is committing to expanding our efforts to relieve hunger, reduce debt, fight disease on the African continent. One thing we discussed was the Millennium Challenge Account, and I assured the leaders we will work harder and faster to certify countries for the MCA, so that MCA countries, and the people in the MCA countries, can see the benefit of this really important piece of legislation and funding.

I also announced last week that the United States will provide about $674 million of additional resources to help alleviate humanitarian emergencies in African nations, especially the growing famine in parts of Africa. On Saturday, we also announced an agreement worked out through the Group of Eight Industrialized Nations that will cancel $40 billion in debt owed by 18 of the world's poorest nations, including 14 in Africa. The countries eligible for this relief are those that have put themselves on the path to reform. We believe that by removing a crippling debt burden, we'll help millions of Africans improve their lives and grow their economies.

Finally, one of the greatest causes of suffering in Africa is the spread of HIV/AIDS. I appreciate Randy Tobias being here. I made fighting this terrible disease a top priority of my administration by launching an emergency plan for AIDS relief. Working with our African partners, we have now delivered lifesaving treatment to more than 200,000 people in sub-Sahara Africa, and we're on our way to meeting an important goal -- an important five-year goal -- of providing treatment for nearly two million African adults and children.

The United States of America is firmly committed to working with government to help fight the pandemic of AIDS. It is -- this crisis is one that can -- that can be arrested. And I want you all to know that when America makes a commitment, we mean what we say, and this government means what it says, and this Congress means what it says, and we'll work together to fight HIV/AIDS.

These are just some of the initiatives that we're pursuing to help Africa's leaders bring democracy and prosperity and hope to their people. The reason I ask these Presidents to join us today is because I applaud their courage, I appreciate their wisdom, I appreciate them being such good friends that they're able to feel comfortable in coming to the White House to say, Mr. President, this is going well and this isn't -- how about working together to make this work better. That's how we solve problems. We solve problems by having a frank and open dialogue.

We believe Africa is a continent full of promise and talent and opportunity, and the United States will do our part to help the people of Africa realize the brighter future they deserve.

Again, I'm honored you all are here. Thank you all for coming. May God bless you all. (Applause.)