For Immediate Release
Office of the Press Secretary
June 13, 2005

THE PRESIDENT: Nice and warm today, isn't it? Glad you're here. Almost a year living and studying in America -- I hope you've come to realize this isn't my house. This is the people's house. And Laura and I are just temporary residents here. That's how democracy works.

I really think you're part of an important program that is bringing students from Muslim countries to the United States. I think it's important, and I hope you think it's important, too. I'm amazed by the number of countries represented amongst you all -- Afghanistan, Iraq, Jordan, Kuwait, Lebanon, Morocco, Oman, Pakistan, Syria, Tunisia, Yemen, West Bank, Gaza, Arab communities in Israel. You represent a lot of countries and a lot of people. Here's what I think. I think your generation is going to help shape one of the most exciting periods of history in the broader Middle East and the world. It's a period of time when the hope of liberty is spreading to millions. 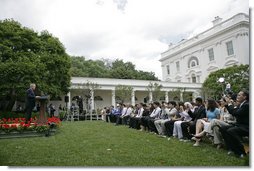 And I've heard your stories, and people who know your program have talked to me about your experiences and your attitudes. So let me make a prediction -- that I should be able to say to the world, I have confidence in the spread of freedom because there's a young group of people who love freedom and want to do something about seeing freedom spread. That's what I think.

I'm really pleased that Dina Powell is here. Dina is the -- Egyptian American, by the way -- she ran the presidential personnel department. In other words, she's the person that brought names to me that would serve in our government. It's a pretty powerful position when you think about it. I nominated her to be the Assistant Secretary of State for Educational and Cultural Affairs. That's a big job here in America. I'm going to miss her in the White House, but our country will be well-served by her serving in the State Department.

I appreciate the staff of the Department of State Bureau for Educational and Cultural Affairs. I want to thank the representatives from AYUSA for being here. And I appreciate the representatives from the Close Up Foundation for coming. I want to thank your chaperones for being here, as well -- caring adults, people who want you to enjoy your experience here in America.

The American people probably don't know this program well, so I'm going to say some things that's obvious to you. First, you've been here for 10 months; and secondly, you've attended American high schools, and you've stayed with American families, and you made American friends -- which means that you have made contributions, you've contributed to better understanding. 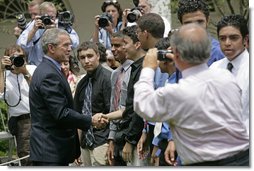 You've also done some interesting things. I've been told you volunteered in local charities. You found out one of the great strengths of this country is the fact that people volunteer to make somebody else's life better. We all got hearts and care deeply about a neighbor in need, and there's a universal call in the Good Books throughout the world that says, love a neighbor like you'd like to be loved yourself. And I understand some of you did that. And I want to thank you for contributing to our country.

I know there's a student here who went to Grayling High School in Michigan, Abdul Rahman. He's from Syria. He took on a special project; he decided -- and I'm sure maybe some of you all did the same thing during the holy month of Ramadan -- explained to students what that means. A lot of kids your age here in this country really aren't sure what Ramadan means, and it's important for them to understand what Ramadan means. And so Abdul -- here's what he said. He said, "When I got to one of my classes on the first day of Ramadan, I was totally amazed. There were signs everywhere in the class saying 'Happy Ramadan Abdul.' Some students even tried to fast with me on the first day."

Getting a high school kid in America to fast is kind of hard to do. (Laughter.) But the point there of the story is, somebody -- some kids in that high school class have a better understanding of a different culture.

I suspect during your stay here you came across Americans who hail from your home countries. If you didn't, it's only because you didn't get enough exposure, because I can assure you, for every country represented here, there are hundreds of Americans -- at least hundreds of Americans from your native land; men and women who came to America because they know this is a land where hard work will be rewarded, where faith will be respected, and where cultural heritage will be valued.

Maria -- a young girl named Maria, from Pakistan -- I don't think she's here with us today -- put it well in an essay she wrote about her experience. There's some Americans who may be watching this on TV now, and I want them to hear what Maria wrote. She says, "The very important thing I learned about America is that it's a melting pot where you can find the world in one place living together. I really appreciate this," she said. "Now if someone says anything negative about America, I would stand up, because I love America." That's one of the lessons she learned about her trip here.

I don't know if you -- I guess you all were here during the presidential election. It must have been an interesting experience for you. It was certainly an interesting one for me. (Laughter.) You got to see candidates travel the country asking for the vote, working day in and day out -- in my case, saying to the people, I got something to do; in my opponent's case -- my opponents' cases, saying, I think I can do a better job than old George W. But that's what democracy is about. It's about understanding the boss -- in our form of government, the people decide. And that's a form of government that's healthy and good

I know some of you got involved in the campaign. Cowtar from Morocco volunteered on election day, helping make sure Oregon voters had rides to the polls. And I want to thank you for participating. I was told that a fellow named Butan from Iraq, who's with us, actually volunteered at a local political headquarters in the state of Pennsylvania. I hope you found that an exciting experience. It's called grassroots politics. It probably doesn't translate very well in some of your native tongues, but it means getting involved at the local level to convince people to participate in the democratic process.

We're seeing the democracy campaigns like the one I went through taking place now in other parts of the world. I mean, Afghanistan had a vote. It was a fantastic experience for a lot of people -- folks. And I know some of you lived under the clutches of the Taliban; it must have been an incredibly refreshing experience to be able to go and express yourself at the polls, say, this is what I think; this is my opinion. Not the opinion of tyrants, but, this is my opinion. And it's the collective opinion of thousands which decided the fate of that country.

People in Iraq voted. People in that country defied the car bombers, the suiciders, the killers, those who fear freedom, and said, I'm going to go to the polls, no matter what the risk is. Democracy is on the march. Freedom is on the march. And I'm convinced we're just seeing the beginnings of it, and the world is going to be more peaceful because of it.

I know you're looking forward to going home. But when you get home, I hope you remind people about what you found here -- that the people of this country care deeply about others; that we respect religion; that we believe in human rights and human dignity; that we believe every person has worth; and that we do want to have a world that's more peaceful and more free.

I hope you go home and say that Americans are proud of watching the progress that is being made of people assuming liberty. One of the lessons I hope you share with the people back home, your buddies and your families, is that we understand that it's hard to go from tyranny to freedom. We had a little trouble on our own -- if you've studied American history, you'll realize that our path to democracy wasn't all that smooth. In other words, we had setbacks and hard work to try to achieve as good a government as we can possibly have. It's hard work. It's really hard work.

I hope when you go home you explain to people that we understand that the form of democracy your country takes will reflect your values and your history -- not American values and American history. In other words, we love the concept of people being free; we believe democracy is the best form of government; but we fully understand that it's got to be a democracy that suits the needs of the people in the countries from which you're from.

I hope you realize the impact you've made on some people. A lot of people -- you know, there's such a thing called "word of mouth." People get talking, I met so-and-so, I met old Abdul. He seemed like a good fellow to me. And the word gets out about the values that you brought to America. There's a lot of people here in this country, now when they start thinking about the Middle East, they're going to think about it differently because of the impact you've had on them, because you were willing to share your culture and your way of life.

I hope you look at yourself as bridge builders. And as importantly, I hope you look at this experience as the beginning of a journey that will -- in which you'll become leaders. You know, old guys like me will be moving on, but someday -- I plan to live for quite a while -- someday I hope to turn on my TV and see you standing up leading your country, or talking about human rights and minority rights, and human dignity in the countries where you're from. I hope you understand that you have a fantastic opportunity to make a difference. You've already made a difference here in America. And with this experience, go home and continue making differences.

By the way, if you feel like going to college, come back. We've got some great universities here. We want people from all around the world coming to our universities. Tell your buddies, your friends and neighbors, to think about coming to America to go to university. The more exchanges there are of people of like age, the better off the world will be.