For Immediate Release
Office of the Press Secretary
June 10, 2005

I first want to express my country's deepest condolences for the accident that took place, where a U.S. military vehicle killed a Korean woman. And we send our deepest sympathies to the woman's families. And, Mr. President, I just want you to know our heart -- our hearts are sad as a result of this incident. 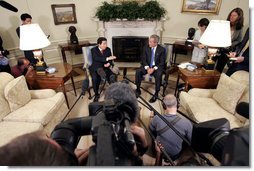 This is my fourth meeting with you, Mr. President, and my second visit to the United States. And every time we meet together, Mr. President, questions abound regarding the possible existence of differences between Korea and the United States surrounding the North Korea nuclear issue. But every time I meet you, Mr. President, in person, I come to the realization that there, indeed, is no difference between our two sides with regard to the basic principles. In fact, we're in full and perfect agreement on the basic principles. And whatever problem arises in the course of our negotiations and talks, we will be able to work them out under close consultations.

There are, admittedly, many people who worry about potential discord or cacophony between the two powers of the alliance. But after going through our discussion today, Mr. President, I realize once again that with regard to all the matters and all the issues of great importance, we were able to deal with them and we were able to bring closure to them smoothly. And I am very certain that our alliance remains solid, and will continue to remain solid and staunch in the future, as well.

To be sure, there are one or two minor issues, but I'm also quite certain that we will be able to work them out very smoothly through dialogue in the period ahead.

` How do you feel, Mr. President? Wouldn't you agree that the alliance is strong and everything is working --

PRESIDENT BUSH: I would say the alliance is very strong, Mr. President. And I want to thank you for your frank assessment of the situation on the peninsula. And I'm looking forward to having lunch with you. I'm hungry, like you are. (Laughter.) 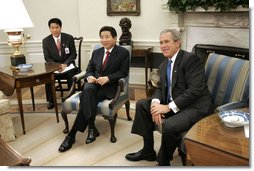 So I'm going to answer two questions -- first from Tom.

Q Mr. President, just two days ago, the Vice Foreign Minister of North Korea said they do have a nuclear arsenal and they're building more. Doesn't statements like that make it -- suggest that North Korea will not come back to the bargaining table? And doesn't it make it harder to bridge the kinds of differences that do remain between the U.S. and South Korea?

PRESIDENT BUSH: No, I -- South Korea and the United States share the same goal, and that is a Korean Peninsula without a nuclear weapon. And that's what we've been discussing, how best to do that. And the President and I both agree the six-party talks are essential to saying to Mr. Kim Jong-il that he ought to give up his weapons. We're making it very clear to him that the way to join the community of nations is to listen to China and South Korea and Japan and Russia -- and the United States -- and that is to give up nuclear weapons. And we'll continue to work, to have one voice.

We laid out a way forward last June that is a reasonable proposal, and we're still awaiting the answer to that proposal. But today's meeting should make it clear that South Korea and the United States are of one voice on this very important issue.

Q Sir, are there any inducements you're willing to offer to get North Korea back to the talks? And if I could ask about Syria, as well.

PRESIDENT BUSH: Steve, first of all, the first part of your two-part question is this: Last June we did lay out a way forward. And it's just not the United States; this was a plan that the United States and South Korea and China and Japan and Russia put on the table. And the plan is still there, and it's full of inducements.

The second part, on Syria --

Q Is it your feeling that Syria still has intelligence operatives in Lebanon, and are they carrying out targeted political killings?

PRESIDENT BUSH: Well, I've been disturbed by reports I read in today's newspaper that said that Syrian intelligence officers might still be in Lebanon, and might still be there. And our message -- and it's not just the message of the United States; the United Nations has said the same thing -- is that in order for Lebanon to be free, is for Syria to not only remove her military, but to remove intelligence officers, as well. And obviously, we're going to follow up on these troubling reports, and we expect the Syrian government to follow up on these troubling reports.