For Immediate Release
Office of the Press Secretary
June 8, 2005

THE PRESIDENT: Mr. Prime Minister, welcome to the Oval Office. We've had an extensive visit about a lot of issues. And the reason why is because Turkey and the United States has an important strategic relationship. I told the Prime Minister how grateful I was that he was a -- is a strong supporter of the broader Middle Eastern initiative. Turkey's democracy is an important example for the people in the broader Middle East, and I want to thank you for your leadership. 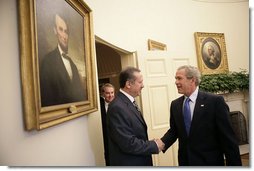 Along these lines, I thanked the Prime Minister for Turkey's leadership role in Afghanistan. I was most impressed by his report from his trip to Afghanistan and his deep concern for the conditions of the people there and his desire to work with the United States and NATO countries to help improve the lives of the children, for example, in Afghanistan.

We discussed a lot of foreign policy and shared interests between our countries. And one of the most important foreign policy initiatives of my administration -- and I know the Prime Minister shares the same desire -- is to work with the Palestinians so they can have their own state, their own democracy, living side-by-side in peace with Israel.

And, finally, we discussed the domestic issues. We discussed our economies. And the Prime Minister reminded me that the -- in his judgment, Turkey is a good place for U.S. investment. I listened very carefully to what he had to say, but we spent -- all in all, it was a very rich and important discussion.

PRIME MINISTER ERDOGAN: Thank you, Mr. President. In our meeting with the President, we discussed and evaluated the political partnership that we have with the United States and we looked into the future with regard to our relations. I can summarize the main titles of our discussion as freedom, democracy, rule of law, fight against terrorism, security and human rights.

We also had an opportunity to talk about the broader Middle East initiative, with regard to regional developments. We also discussed the Cyprus issue. And we were able to discuss with some depth the issues with regard to Israel, Palestine, the situation in Iraq, Afghanistan.

We discussed, and I'm confident that we will continue to have the same kind of solidarity we've had in Turkish-U.S. relations in the past, in the future, as well.

I also mentioned to the President that Turkey is open to any new investment as a country now of stability and security. And we were very happy to see that the President agreed and he had a positive view on investments.

And we're happy that we were able to confirm that our strategic relationship will move and take place in the future, as it has been done in the past.