For Immediate Release
Office of the First Lady
June 2, 2005

MRS. BUSH: Well, I've traveled around the United States and visited a lot of terrific projects that have to do with helping youth. And I want to congratulate Freddy and thank you, Miguel, for spending time with him and for helping him as he tries to change.

All of us know how difficult it is to change, and that's what is so difficult about the work that you -- that you're pursuing, and that is, it's hard. It's hard. And you -- especially when it's this, when you fall down and something happens, somebody dies. And that's really, really terrible, the loss of life, and the whole way that communities are injured when someone is killed, when someone is shot in a community; all the repercussions that go out, the family members, every part of it, the way you all suffer. I notice you're wearing your dove in memory of somebody. 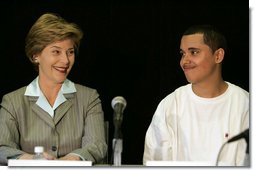 And so that's why it's so important for everybody in the community to be involved in something like CeaseFire. And that's why you're effective, because it isn't just the police by themselves, but also the clergy join, community people join, doctors join, with a clear plan, with a clear goal, with clear objectives that everybody understands, so, at the end, you have a clear outcome. And you know if you're successful, because the homicide rates decrease. And of course, what we want is for there to be zero in that number.

But I want to congratulate you all. As I've traveled, this is what -- at every stop that I visited on these Helping America's Youth stops, first, I meet the most inspirational people, at every one of them. And nearly every great project has a number of people involved in it who have changed their own lives and know it's possible to change lives, and are willing to go beyond themselves and out of their own problems and help other people, like you have, Miguel. And a lot of times we find out that's really good medicine for ourselves, that that helps us.

Second, that there is a collaboration, that there's a whole group, that there's not just one person or one leader, but it's groups of people working together to -- for the good of the community, and we see that.

And third -- and I think this is really important -- is we come to find out that children and young people need loving and caring adults in their lives, and every one of them need that. And the way we can help them get that, if they don't have that in their own home, is to figure out ways to get mentors, to get people like Miguel, who will spend time with a young person.

Second, young people need an education. And third, they need an education that leads to a job, they need to be employed. And that's really, really important. It's important for our whole country to look at those. We're all -- we all pay attention education. I came from a Chicago public school right before this; we know how important that is. But we also need to think about, in the education piece, are we giving children the skills that they can get out of school and they're employable, that somebody will employ them, that they -- can have a job. And that's another very important piece of it. 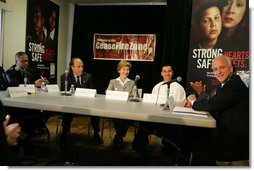 And what you're doing when you work with people like Freddy and Miguel is you're giving them the chance to get that education so that they can succeed.

It's so important that we help young people make good decisions so that the decisions they make impact their lives in a good way. And when all of us look at ourselves, we know that when we were 13 or 14, we probably couldn't make really good decisions. But the idea that we would make such a bad decision, that it would impact our lives for the rest of our lives, is what we want to avoid for children. We want them to be able to make good decisions so they can grow up to be successful.

I want to let people in the Chicago area know that this is CeaseFire Week, it's starting next week on June 4th, I think. So I want to encourage foundations and community groups to look at CeaseFire as a recipient of funds, for one thing, but also as a way to volunteer and make a huge difference in your community.

Thank you all. You're an inspiration to me. I want to thank you. You can do it.