For Immediate Release
Office of the Press Secretary
June 1, 2005

It's been my pleasure to work with this good man. The Secretary General is a visionary leader of a very important alliance, and that is NATO. America is a proud member of NATO. We view NATO as our link -- our transatlantic link to Europe. NATO is a place where not only do we work to -- work on defensive measures to protect our respective people, but it's a place where we are proud to strategize as to how to promote values of -- universal values of democracy and freedom and human rights and human dignity. 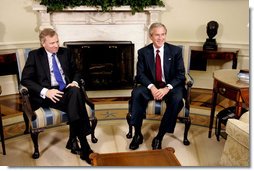 Under the Secretary General's leadership, NATO has been active in places like Afghanistan and training troops in NATO. And today we discussed the NATO mission in Darfur, to help deal with human suffering in that part of the world.

So, Mr. Secretary General, I am proud to call you friend and proud to work with you, as the President of a contributing member of NATO. Welcome.

SECRETARY GENERAL de HOOP SCHEFFER: Mr. President, thank you very much, indeed. I can echo the words you said. NATO has always been, and still is a value-driven organization; it's about values. The same values we have defended in the Cold War we are now defending in Afghanistan, at the Hindu Kush Mountains. We are training the Iraqi security forces, so that that country can stand on its own feet as soon as possible. We are staying the course in Kosovo. We'll have, as the President mentioned, support for the African Union in Darfur. We're having an anti-terrorist operation in the Mediterranean. We'll stay the course; we'll stay the course. We do that with the 26 NATO allies -- of course first and foremost with the United States of America -- and we do it with our partners, as well, with important partner countries of NATO, like the Ukraine, like our partners in the Balkans.

Mr. President, thank you very much.

PRESIDENT BUSH: Welcome. Thank you for coming. I appreciate it.