For Immediate Release
Office of the Press Secretary
May 25, 2005

THE PRESIDENT: This is the beginning of some fantastic technology. And thanks for having us out here. We're going to look at some other vehicles here in a minute, but, you know, hydrogen is the wave of the future. And this country is going to have to use technology to diversify away from hydrocarbons. We're too dependent on foreign sources of energy today, and one way to diversify away from hydrocarbons is to use hydrogen, the byproduct of which will be water and not exhausts which pollute the air. 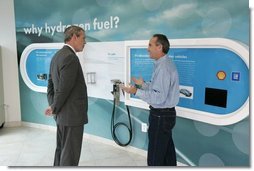 So I'm excited to be part of a technological revolution that's going to change the country. It won't happen overnight. It's going to take a fair amount of research and development to make sure hydrogen is attractive and reasonable -- is able to be manufactured at reasonable price, distributed in a wide way for consumer satisfaction.

But it's coming. We're spending about $1.2 billion on hydrogen research. America leads the world in hydrogen research. It's a part of our efforts to help diversify away from hydrocarbons. And the problem we face today at the gas pump is we're too dependent on foreign sources of energy.

So thanks for showing us this. It's exciting. It's the early stages of what will be available to a lot of Americans. Thank you.

Q How is the energy bill coming?

THE PRESIDENT: Energy bill? What was your question?

Q How is the energy bill coming along?

And so we're working with the senators. Senator Domenici is intent upon getting an energy bill out. Once they get out of the Senate, they've got to work out their differences with the House. And I think the American people are tired of waiting; I know they are. And I submitted a plan to the Congress four years ago, and I'm getting a little tired of waiting on an energy bill. For the sake of energy independence, they've got to get me a bill.

And it's a comprehensive bill. It talks about encouraging conservation, environmentally-friendly ways to explore for hydrocarbons, money to diversify away from the hydrocarbon economy we live in, and ways to modernize the electricity grid. I'm hopeful they'll get it done. But we're going to push hard to make sure they do. 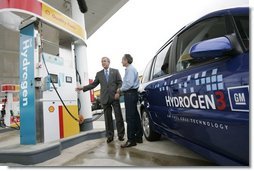 Q Did you sign any bills yesterday? Do you sense a new bipartisanship?

THE PRESIDENT: We'll see. It's all going to be in the results. I'm a results-oriented person. I want to see the bill to my desk. That's the definition of people committing themselves to get something done. The American people expect them to get something done; I do, too, because we're too dependent on foreign sources of energy.

Go ahead, what was your question?

MR. SCOTT: Yes, sir, we filled up .183 kilograms, because it's a gas. Now the cost factor -- right now it's a demonstration mode, so when it rains, I jack up the cost, and when it's sunny I bring it back down. (Laughter.) Today, with the --

THE PRESIDENT: How is -- what is the -- what he really wants to know is the equivalency.

THE PRESIDENT: But what's the equivalency to the normal tank --

MR. SCOTT: It's twice as much as premium, because the car is two times more efficient in its energy, and it's a quality fuel.

THE PRESIDENT: It's also the beginning of technology. In other words, a new product generally is more expensive, and, you know, there's more volume, more distribution. Part of the reasons we're spending money is to see if we can't encourage technology to enable the industry to extract hydrocarbon at more reasonable -- I mean, hydrogen at more reasonable price.

A couple of bottlenecks, it seems like to me -- and you can help me out here. One, obviously, is the manufacturing of vehicles that use hydrogen. Secondly, it is the ability to produce hydrogen. It requires energy to produce hydrogen, and therefore, trying to use our research dollars to figure out how best to do that in efficient ways. And, finally, to make sure that the infrastructure is such that consumers can buy hydrogen in a convenient way.

But we've got work to do. No one thinks this technology is going to overwhelm our society in the immediate term. This is a 10-year project, as I -- when I announced it to the United States Congress. The key is, is that we're now putting things in place today, making investments today, encouraging development of alternative sources of energy today, that will help transform our energy mix for tomorrow so that ten years from now, hopefully, we can look back and say, thankfully, Congress finally acted, and President Bush led, so that we're able to diversify away from oil and gas. And we need to do it for the sake of our energy security and national security. 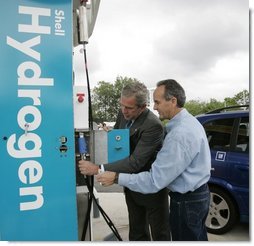