For Immediate Release
Office of the Press Secretary
May 20, 2005

PRESIDENT BUSH: The Prime Minister and I will be glad to answer two questions per side.

First, Mr. Prime Minister, welcome back. It is so wonderful to see you. He's a good friend of mine. Denmark is a good friend of America. I appreciate your contributions to transatlantic ties. The Prime Minister has made very constructive and helpful comments to make sure that the transatlantic ties between the United States and Europe are strong. And I want to thank you for your leadership role. 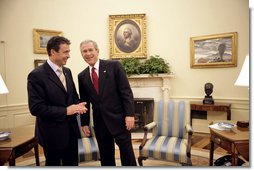 I also appreciate your clear understanding about the historic times in which we live, times in which more and more people are becoming free. I appreciate your strong support for those who desire to live in a democracy in Iraq. I thank you for your contributions to a new democracy called Afghanistan. I thank you for your very constructive work in helping the Palestinians develop a democratic state that can live side-by-side with Israel in peace.

So welcome back. It's good to see you, sir.

PRIME MINISTER RASMUSSEN: Thank you very much, Mr. President. I'm delighted to be back in Washington. It's my fourth visit as Prime Minister, which underlines that the United States and Denmark are close friends and allies. We share the same fundamental values. We are allied in our efforts to promote freedom and democracy worldwide.

And I'm happy to say, in addition to this, that I appreciate very much your straightforward style. I consider you a friend and I know that with you, I'll always have a very frank discussion and exchange of views. So I'm happy to be back.

PRESIDENT BUSH: Fortunately, he's not that good a friend that I would go running with him. (Laughter.) He's one of the best runners in the world, amongst the world leaders. He's a good one.

Q Mr. President, on stem cells, specifically, would you veto legislation that loosened the requirement on federal funding for stem cell research? And secondly --

PRESIDENT BUSH: I'm -- first, I'm very concerned about cloning. I worry about a world in which cloning becomes acceptable. Secondly, I made my position very clear on embryonic stem cells. I'm a strong supporter of adult stem cell research, of course. But I made it very clear to the Congress that the use of federal money, taxpayers' money to promote science which destroys life in order to save life is -- I'm against that. And therefore, if the bill does that, I will veto it.

Q Mr. President, how do you react to the continuing reports about mistreatment of prisoners held by American military around the world, and also the perception abroad that the ones that are paying for it are low-ranking soldiers, but that nobody higher up is taking any responsibility?

PRESIDENT BUSH: I think the world ought to be -- pay attention to the contrast between a society which was run by a brutal tyrant in which there was no transparency and a society in which the whole world watches a government find the facts, lay the facts out for the citizens to see, and that punishment, when appropriate, be delivered.

If I'm not mistaken, I think about over 20 percent of the people thus far that have been held to account as a result of the Abu Ghraib issue have been officers. There have been over, I think, nine investigations, eight or nine investigations by independent investigators that have made the reports very public. I'm comfortable that we're getting to the bottom of the situation and I know we're doing so in a transparent way. Obviously, ours is a country that respects human rights and human dignity, and if those rights and dignity have been denied, we will hold people to account.

Q Sir, are you worried that the publication of the Saddam photo, along with the Newsweek story, will further inflame tensions and inspire the Iraq insurgency and anti-Americanism in the Middle East?

PRESIDENT BUSH: I think the Iraq insurgency is inspired by their desire to stop the march of freedom. Remember, these are ideologues of -- that murder innocent people in order to spread their dark vision of hate. And, therefore, when light begins to show up in the form of democracy, it frightens them. There is no future for these haters in a free world. And so they're inspired by the fact that they see democracy emerging in Iraq. That's what causes them to want to kill. They're frightened by the fact -- and inspired the wrong way, by the way -- by the fact that Afghanistan is free. They're seeing the people in Lebanon demand free and fair elections. And their ideology cannot survive in a democratic society. See, the only way they can survive is to -- is to try to shake our will by killing innocent life.

And that's why our strategy in Iraq is to train the Iraqis so that they, themselves, can fight off these terrorists. Listen, eight-and-a-half million people went to the polls, in spite of the fact that the -- people had been killed and there was incredible intimidation. And they defied the bombers. These people want to be free, and the killers don't want them to be free. And so our strategy is to help the Iraqis realize the dream of a free society. And when the Iraqi troops are properly trained -- and we're headed in that direction -- of course, it will take less of a coalition effort to help this new democracy get started.

Q What about the Saddam photo? Does that have any --

THE PRESIDENT: Well, you asked me whether or not that would inspire people. You know, I don't think a photo inspires murderers. I think they're inspired by an ideology that is so barbaric and backwards that it's hard for many in the Western world to comprehend how they think. But I would just remind people, if you want to know how ideologically grim their vision of the world is, just remember the Taliban. They said, if you don't agree with our religious views you'll be prosecuted; if you're a woman who seeks freedom, you'll be beaten. So these people are motivated by a vision of the world that is backward and barbaric.

Q Mr. President, while the Danish people might support the war and appreciate the progress in Iraq, they're also curious when our soldiers will come back home. Can you elaborate on that?

THE PRESIDENT: Well, I appreciate that question a lot and, of course, I get asked that in our own country a lot. And my answer is, it makes no sense to set a timetable. And the reason why is, is because it will allow an enemy to adjust.

On the other hand, as I tell our folks, is that we would like to get our troops out as quickly as possible. And the definition of that will be how soon our commanders on the ground think that the Iraqis are able to take the fight to the enemy.

I just got off of a video -- which I'm looking to briefing the Prime Minister on -- with General Casey, who is our general on the ground, he's the commander of the coalition forces. And he was describing to us the Iraqi training and the quality of training. And some units are in really good shape and other units need additional work. But one of the things that's important to understand is the Iraqi government understands that as civilian governments change, there needs to be stability in the military and a chain of command that links top to bottom. And General Casey knows we're making progress toward establishing that chain of command.

My answer to the Danish people is, as soon as we can possibly get it done. We've got to complete the mission. A free Iraq in the midst of the Middle East is going to be a powerful -- a powerful agent for peace.

Listen, thank you all for coming.

PRESIDENT BUSH: We don't want to break precedent. Was that you, Mark, who asked that?

PRESIDENT BUSH: No. (Laughter.) You know better than that.